With the single-speed nationals coming up I needed to get a bike ready. I didn’t have a lot of choice in the end and it came down to repurposing my 1993 Litespeed Ocoee. The Compass Rat Trap Pass tires had to go, and I figured the drops could go too. The obvious tires to use were the Simworks Homage’s which were currently on my 26 inch Santa Cruz Superlight.

Once the tires were mounted it seemed fitting to me that I needed a matching saddle, and I had a dead Michelin Wildgripper that was screaming out to be repurposed.

I cut one up and glued it onto a spare carbon weener saddle that had been doing nothing. I thought it looked alright. The carbon base was very very stiff tho….

A couple of days later I decided I better do my first single-speed ride since the nationals in 2013 and I went out for a 3 hour ride with Mossieur Veganburger. I didn’t use the Green saddle, but used a yellow Tioga Spyder knock-off. It was very very comfy.  What if I could combine the comfort of the Spyder with the looks of the Wildgripper Homage?

There is a lot less surface area in one of these saddles, so I would have to sew the pieces together first, with mint flavoured dental-floss, then glue it on.

It worked better than I thought. I’m not going to put Busymanbicycles out of a job anytime soon, but it was a lot of fun.

Fingers crossed it hangs together for the nationals in Te Mata peak this weekend ! 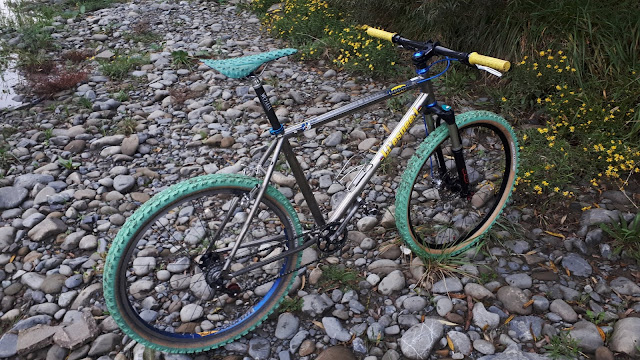