Its been another busy month. Everyone is building new bikes. Ben has built up his Ibis Hakkalugi cross bike, waiting only on a head-set and Dan has finally finished his very classic looking Singular Peregrine.

Marco and Dave have gone to XX1, the crazy new 1 x 11 drive chain that has a rear cluster ranging from 42 to 10 teeth, the bottom 9 sprockets being engineered from a solid billet of steel.

The Bike Tech crew, Dave, Simon and myself, teamed up with Voodoo Lounger Ran for a cross bike ride a couple of weeks ago, the high-light of which was Simon falling off (NOVICE) while Dave proceeded to ride over his bald head. Lucky Dave was the only one not on a CX bike and his patented VPP suspension meant that he didn’t feel a thing. Neither did Simon, but he could be head injured, who could tell ; )

Previous to that there was a weekend away where a bunch of us, Marco, Ash and Peter went up to Taupo to do the Huka Challenge. Marco had some issues with a wheel that would barely freewheel and his crank almost fell off within minutes of the finish line. The 85km course was a continuous single-track blast and the race seemed to be over in no time at all. I snuck home 1st in my age group, (as did my roomy Peter Reynolds), and caught all but two of the age-group riders that started 5 mins in front of us in the Huka XL race. Pete is 61 and finished less than 2 minutes behind me. Lucky he sconed himself at the start or I would have been “crustied!” We did the Huka Challenge which is for people without race licences.

After talking about racing my Cyclo Cross bike I chickened out at the last minute and rode my trusty Santa Cruz Superlight fully. I didn’t regret it. I finished with almost two spare full water bottles so I’ll know not to take so much water next time. I could have done with another bottle of coke though for the last hour, nutrition was great up until then as I had a bit of a bonk after catching up to Ant Bradshaw and Samara Sheppard. I got stuck behind a pretty fit guy on a 26 inch Cannondale Flash earlier on in the race but it was only a matter of time before he face-planted and I could get past. Those bikes are dangerous with anything less than a 650B wheel on the front, especially in the hands of your typical weight weener.

Apparently numbers were down quite a bit on previous years, (only 8 thousand)  maybe some people are wondering if 100$ is too much for a free water bottle?  I have only just learned that the sponsors actually have to pay to put their product in the “swag-bags”.You couldn’t fault the marshalling or course marking but it would have been good to know that there was a prize giving so we could have heard what happened at the front end of the MTB race. Taupo was certainly jam-packed with cyclists and we managed to sneak in two parties before the night was done and all good crusties hit the hay at 10pm. First up was the Bushlove pool-party and then later on the Roadies party with Ray, Barney and Hendi. A very nice way to spend the remainder of the day.

Nobody was ready for the shock of Paddy Avery’s death in a short race in Rotorua last week, but it brought up the question of just how much good, or harm racing at intense levels is doing us. While Paddy was only young, there is an increasing list of people in their 50’s being diagnosed with various variations on heart arrhythmia’s. How much of it is genetic and how much is long term abuse? The Avery family are one of the most well known families in NZ MTBing with Clinton the “Tank” Avery being one of the first wave of Rotorua youngsters to follow their cycling passion onto the world stage. I met his equally passionate mother Mary Anne once at a coaching clinic, she was a bit bummed that the roadies had stolen Clinton away from his MTB roots, despite the response that Clinton could one day win Paris Roubaix. The Avery’s all live for cycling and as the second tragedy to hit Rotorua biking this year it just seemed too much. See attached a tweet from NZ’s junior world champion Anton Cooper. What an amazing photo. RIP Paddy.

I went for a ride with Peter Reynolds on Sunday on the cross bikes, me on my Singular Kite and Peter on his BMC. Poor Pete was hampered with the most debilitating fork shudder I had ever seen. There is some work to do to make that bike safe! Last night I took off my rear XTR cantis which were effectively useless, and replaced them with some very old-school over-length cantis which were ex Marco’s spare parts bin. What a revelation. Pad clearance is still massive and they really work. This what they look like, on the right.

I tested the new rear brakes out on my Belmont Road Moonshine River Trail commute this morning and they rocked. I was listening to a podcast at the time from Kim Hill’s interview with Kathleen Sharp on her new book “Blood Medicine” which talks about the drug EPO and the corrupt ways it was pushed by the companies that sold it and the many deaths it caused.

The author commented how she thought it was ironic that while watching some Tour de France coverage she saw an advert for Johnson and Johnson’s version of EPO, Procrit. What would she have thought if she knew that Amgen sponsored the biggest race in the US, the Tour of California, and knew that the UCI, effectively the world franchise for cycling wouldn’t allow USADA full control of the drug testing process for the event? How many elephants can you fit in the one room?

On a weirder note, a couple of weeks back, on my morning commute via Belmont road, I came across this guy in the middle of the trail. At first I thought I was hallucinating, he waved his one good arm at me agressively so he still had plenty of fight in him. What the hell a 6 inch Koura (freshwater crayfish) was doing in the middle of a gravel road was beyond me, so I stuck him in my backpack and liberated him a couple of hundred metres up the road in a stream I knew of in the Kilmeister Block. He seemed pretty happy at that point. 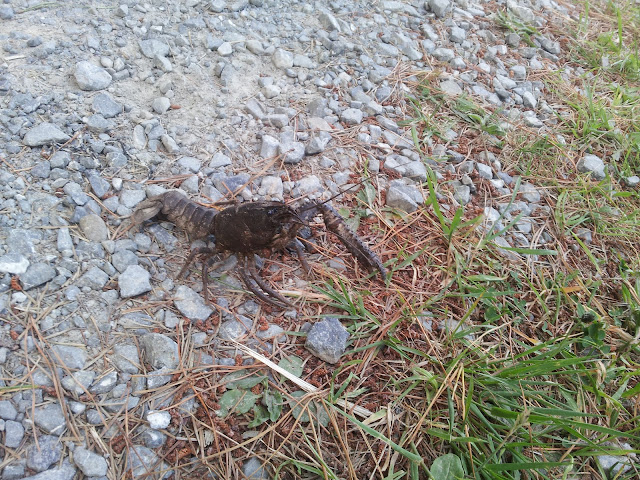