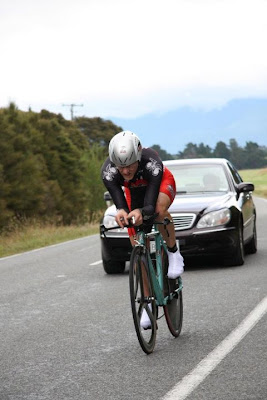 Here is a nice image from my workmate Grant Kellett’s partner, Jude.
They are both part of the Place Recruitment Cycling team that has been
really getting into it big-time since their enthusiastic sponsor Mike
Stewart got the bug.

Grant has been TTing for less than a year and he
has broken the magical 60 mins barrier 3 times now, in fact, each time
he has attempted it; his latest time a 57:47. That’s impressive. Like
me, Grant was a mountainbiker who drfited to the dark side.

Grant says
the enthusiasm of his Team Leader Mike, is what drives him at the
moment. Enthusiam is most definitely contagious. During a water-cooler
conversation yesterday I found that another of my workmates had
experienced one of the RPM classes that Grant runs at Les Mills and he
swears he is going to the gym now at least 3, maybe 5 times a week for
the rest of the year.

I had a pretty good time trial on Sunday at the WVCC’s open event. The “National Veterans TT Champs”. Its an historical event that I don’t think has any true national status, but in the past has pulled in some very good riders. It was my first 40km since 2007, and I managed
to slash my old PB set in 2003 by 19 seconds down to 57:30. We were
very lucky with the weather. In my many years of time trialling I have
probably only had three “optimal” weather days, and they all resulted in
records, two of which still stand. Its a bit like doing
the Karapoti. If there is a fast year and you are not there, then its
your bad luck.The old saying of to finish first, first you must finish
should also say, but even before that you have to turn up!

There has been plenty written on why you don’t necessarily have to
go slower as you get older. I tend to think that most people get slower
because over time their motivation wanes and they tend not to hammer as
much. In other words, they don’t do the intensity any more, and settle
for long slow distance rides.

There is one obvious way to counter this. Enthusiasm for new types of riding.

There are so many different kinds of things you can do on a bike these days, and they needn’t all be competitive.

Many people fail to see the symbiotic relationship between riding
buddies and how it can really lift both their games. Maybe you are not
enthusiastic one day, but chances are your buddy will be.

Inspiration is another motivator. When I see 75 year old Gary
Humpherson smashing the world pursuit record, and 65 + rider Alan Luff
breaking 60 mins for 40kms its hard not to be impressed.

Having said that, it’s the main rule I always tell people to adhere
to in TTing, especially when they are new to it.  I also say “knowledge
is power” and have a raft of electrical devices giving me more feedback
than I know what to do with. Sometimes its a good distraction from the
pain of TTing, and can give you a good idea of where you are in relation
to your goals.

Funny then that I mostly ignored it on sunday and rode by feel.

Funny
also that when you look down at the Power Tap CPU you are always doing
“god-like watts”. I was so worried by this phenomena that at the top
turnaround I checked my average watts, (a very un-aero three-button
press) and while it was way higher than I would have normally done, it
was nothing like I was imagining from my casual glances. Note to self –
You are not a god.

To cut a long story short, the watts declined over the course of the
race, (not ideal) but to dress it up a bit, if I divided the race into 4
quarters, my second quarter’s watts were the same as my last, which is
what I try to maintain if ever doing intervals.

I was using my Power tap (with disc covers) and another speedo, so at a glance I had:
Power
Speed
Distance
Time
Average speed

I
had an aim of averaging 42kmh, I don’t know why. It was just a target. I
had no reason to think I was going to do a PB, considering the usual
conditions we get to race in, and the lumpy unfriendly nature of the
Kahutara course which I always struggle with. In the past I have ridden
the outward leg a bit conservatively (evenly) and found that I couldn’t
make up the speed elsewhere on the course. This time I was not going to
do that again. It had nothing to do with Peter James placing a bet with
my minute man Pat Evers that I would catch him inside 3kms.

On the final return leg, after dealing with the hammer blow of the
initial head wind I was able to knuckle down and use up every last piece
of energy still lurking in my cells. When I noticed 5kms come up on one of my computers
, I thought cripes. 5kms, that’s not even one lap of Liverton road, I
can do that with my eyes closed, and I  probably did.

There was 1 watt difference between my average and normalised power
on that last leg so I had it pretty much pegged. In leg 3 you can see
the difficulty I had maintaining power with the only slightly downhill
part of the course. This is always a challenge for me, and a good place
for a power meter. Its relatively easy to make “big watts” going up
hill, but try doing it downhill. Its hard.