I was very excited to get a hold of the latest kit from K-Lite
to run through its paces recently. Kerry is constantly iterating his designs but recently he has launched a
couple of very cool additions to his line-up. His new rear flashing lights, (QUBE) and a new
USB converter with dual outputs.

If you followed
the world’s gnarliest bikepacking events, like the Tour Divide, or the Silk Road Mountain Race you
would have noticed that many of the riders were using various models of K-Lite
kit. These guys are using the kit in the crucible of fire, if anything can possibly go wrong, it will.

The flashers
Kerry makes the only dynamo powered flashers, in
the world, called the QUBE, available in 1x or 2x formats, or front and rear sets, for attaching to the seatpost, seat stays or bars.

Somehow
he has crammed little super capacitors into them so that a 15 second
spin of the front dynamo wheel means your rear flashers will go for 3
mins before needing more juice. Not many traffic lights take that long
to change.

The QUBE flashing pattern seems
quite random, but in fact, the LONG/SHORT flash-pattern is
actually what NASA use. It is the best for judging the distance to the rider, and also catching the eye from a distance.

They
are very bright and yet Kerry tells me they draw less than 30mA
intermittently, a typical rear dynamo light draws 110mA at all times. That’s a big difference. If it means anything to you, the standard
bikepacker’s GPS, the Etrex 30, draws 50mA-110mA (back light dependent)
at 5 volts.

Kerry has also done something smart with the optics, so that the further you are away, the brighter
they look, the idea is that the rider behind, sitting on your
wheel, is not blinded, but a car, in the distance gets full blast, clever stuff. These QUBEs are the only item that Kerry is building by hand these days,
so he only does a run on them when he has a big enough order. Check
your local K-Lite dealer for stocks.

The
switch wire/loom comes in two styles. The first one is where the USB-charging out-puts are active all of the time, and you just toggle the front light off and on. This is the mode you will need if you are wanting to run the QUBE flashers.

In the second style, you just flip back and forth between front lighting, or USB charging. 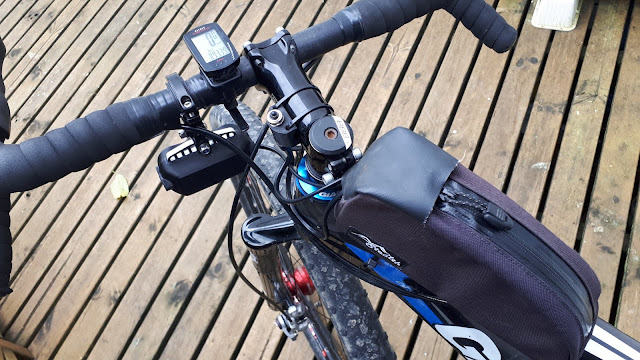 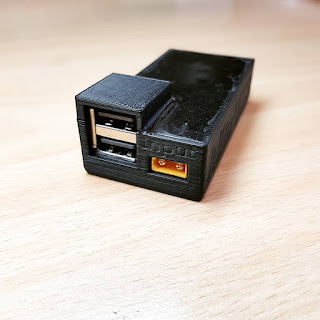 Kerry has some clever smarts hidden in the new dual-port  USB-charger to help with
charging supercap systems like the QUBE. He has more smoothing caps than any of the other USB chargers out there. This does make it a little larger, but it allows safe direct connection of phone or GPS to USB charger, should your USB cache battery stuff up.

Normally connecting a sensitive USB device direct to a dynamo charger (without an inline cache battery) is not advised, as the output can be a bit “choppy” due to the AC conversion done on board. This can cause re-sets and crashes of sensitive USB devices. In the new K-Lite charger with its extra smoothing, it offers another layer of back up, in an emergency situation.

The new design retains the little LED activity light
introduced in the previous model, so you know if the power is making its way from the dynamo to the charger. Apparently the new USB charger lets you run
your SPOT-tracker and charge your USB cache battery at the same time, because the SPOT trackers draw so little power.

The SPOT-tracker will run from the dynamo all day and automatically switch to
it’s own battery only when you have stopped moving. You can even power
your SPOT tracker with no batteries in the bay, just plug it in to the
USB-charger and get pedaling. I haven’t tried this out myself as I
don’t have a personal SPOT tracker. As in his previous model Kerry has all the plugs going in and out of the USB-charger at
the same place, this is great for space saving in your gas-tank, if
that’s where you store your electrics.

Here are a few potential scenarios that you might hope to run from your dual USB-charger. Obviously
it depends on whether its day or night, and the terrain, as the front
lights will use a lot of the power coming from the dynamo hub at night time.

Obviously the idea is to charge your cache battery in daytime if you can as there is a lot more power available when the front lights are off.

My experience with the USB charger and the Etrex GPS was pretty good. Basically, if you have it plugged in to the USB-converter, and you are moving, it defaults to the dynamo for power. I found that it wasn’t until I dropped below 9 kmh that I got the nag-screen. However, if you run the GPS via a cache battery you don’t get the drop-out at all. Etrex AA batteries last for 4 days anyway, and are easily available at most stores or gas-stations, which is why they are so popular. 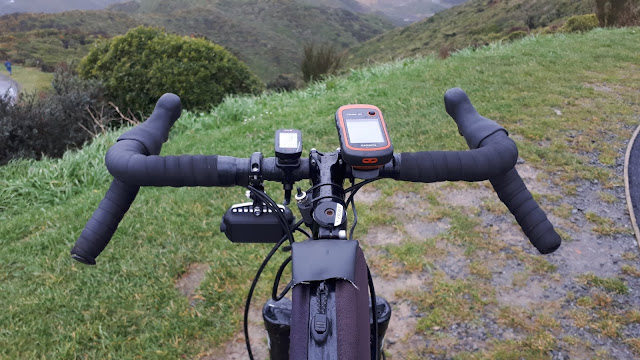 My buddy ran his Garmin 1030 without a cache battery in the Japanese Odyssey last year with no problems using his K-Lite kit. It would just drop down to the internal battery when the dynamo power was too low. The 1030 is a much more sophisticated piece of equipment than the old Etrex though and you have to look at the pros and cons of each device. Matt pointed out that in Japan a lot of the riders used phones instead of GPSes for navigation. In an event where most of the people are topping up their devices in accommodation over-night it’s an option.

The lights
The
lights have undergone a weight-loss programme that shaves a bit more
meat off them but they still share the same internals as the previous
model. Coming in 2 variants, the Gravel/Road and the MTB, the major
difference being that the MTB has a wider more diffuse spread for the
great outdoors, vs the more punchy beam of the Gravel/Road light which
has to compete with urban light pollution.

In both variants the outside lights come on first and are supplemented by the centre beam at higher speeds. Everytime I go out I am amazed at the strength of these lights.

The new K-Lite kit also contains an adaptor for the Universal fork crown mount, allowing easy connection to Supernova or B&M style mounts. The GoPro mount is still a very popular mounting mechanism, and rightly so, with thousands of cheapie variations of it available online. 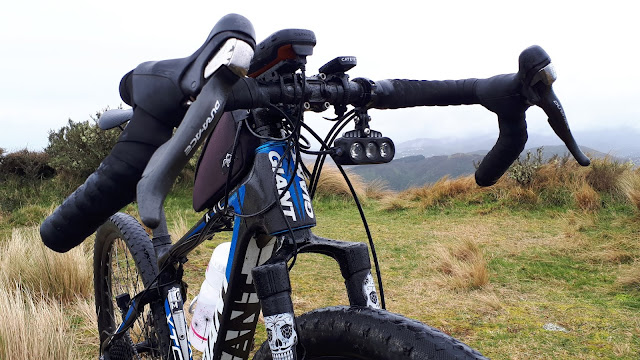 I did a bit more field testing in the weekend with a proposed trip down south to do the Old Ghost road. There was always the chance that the weather was going to be bad, so I had to be open to other options, and I had plans to visit my parents 120kms away in Nelson. As it happened, the trip was cancelled and after some local riding, I rode over the Mangatapu Saddle that links Nelson to Marlborough. I had installed the Dynamo Kit on my Santa Cruz Tallboy mainly for safety as I knew I would be on the seal for at least 60 kms. The dazzling brightness of the rear QUBES made me feel a lot safer on a main road with no shoulder, on a Sunday afternoon. What really impressed my though was the low speed at which the QUBES kicked in. I confess I haven’t checked it with a computer, but for most of the 14.3% hike-a-bike section on the Mangatapu saddle the little buggers were flashing away maniacally. That was an average speed of around 3.3 km/h. Impressive. 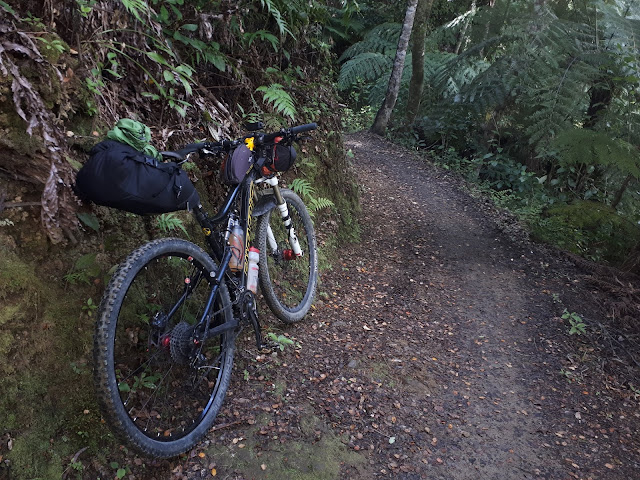 Kerry is always tweaking and launching new stuff, so if you want to get the heads-up on his next thing, its best to follow him on http://instagram.com/klite_dynamo_power/  He has quite a few things going on in the back-ground just now.

If you want to get a feel of what is behind the K-Lite ethos then tune in to this podcast,  https://bikesordeath.com/ep-22-kerry-slaite-mad-scientist-klite/ I guarantee you will be entertained. Warning, contains occasional expletives.