, but my luck continued in 2018 with a 5 week trip to Italy, Croatia and Slovenia, with 5 days in Montalcino Tuscany, to ride the 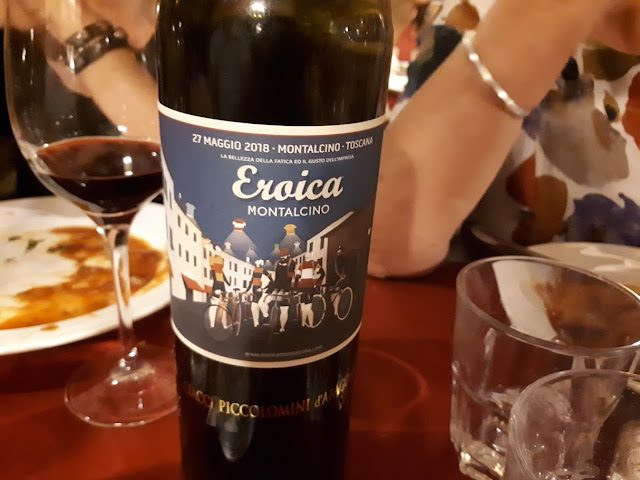 It started out as an opportunity to reunite with some Eroica friends from the Japanese event, my buddy Ran from Wellington, and Darryn and his wife from Melbourne Australia, who we met while in Japan. In the end Ran couldn’t make it but the others could. Darryn’s wife Yvonne, and mine really enjoy each others company so we had all the ingredients for a successful holiday. “Happy wife, happy life” as our guide on our Amalfi coast bus ride told us many times, he should know, his wife ran off with the butcher so he changed camps, so the story goes.

Getting there was half the fun. Despite driving in a country where road rules and speed limits are completely optional, somehow I managed to simultaneously annoy the locals by driving too slow (130kmh in the slow lane), and also pick up a speeding ticket within an hour of getting on the Autostrada. Go figure. We don’t speak Italian so I have no idea what I was supposed to have done, I suspect, being in the wrong place at the wrong time when the officer was down on quota!

Meanwhile, Darryn had gone with the other option: NOT hiring a car, which meant dragging a bike case around from plane to train to bus etc. At least he didn’t have to worry about parking, or speed camera fines arriving 6 months later with a 60 euro admin fee from the rental company! What ever you do, where a bike case is involved, there will be pain! 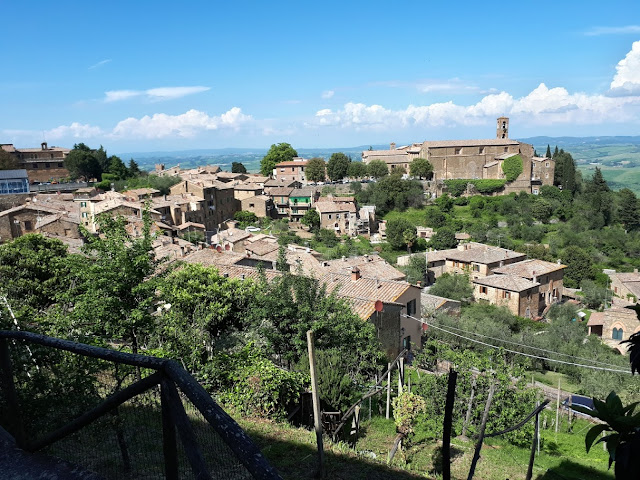 The hill top town of Montalcino in Tuscany was the location for our base, and by pure chance we were a few metres around the corner from Darryn and Yvonne. These hill top towns are dotted all over Tuscany and are amazing with their cobbled streets and beautiful old buildings.  Darryn and Yvonne had been on holiday earlier than us and managed to follow a bit of the Giro and Darryn even got to ride his Eroica steed up a back route to the Zoncalon, so they could view the Giro’s steepest climb. 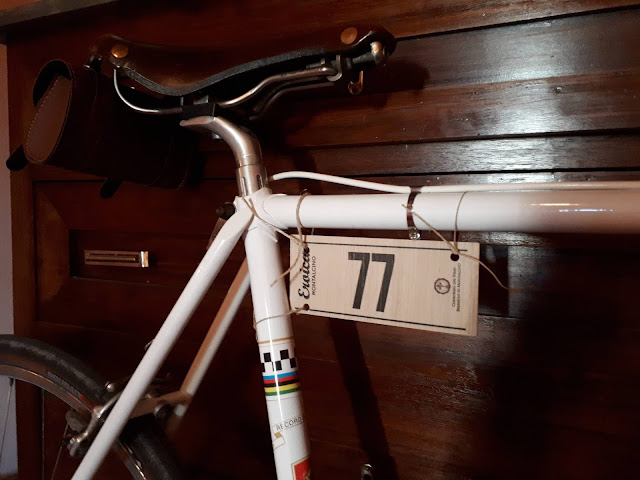 I quickly assembled my bike which had survived the 30 hour flight and car journey from Milan to Montalcino, in readiness for a tootle the next day. We snuck in a ride, enjoying temperatures in the high 20’s. The bikes were all running sweet. 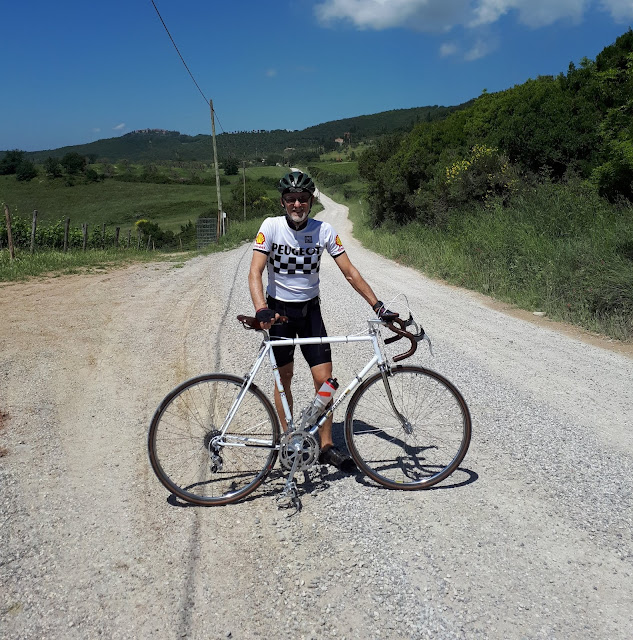 We had decided to go out that afternoon for a drink but Yvonne texted back,  Darryn was stuck in front of the telly. Froome had “done a Floyd  Landis” and ridden away from the bunch, live on TV! I had to join him. Exciting times. 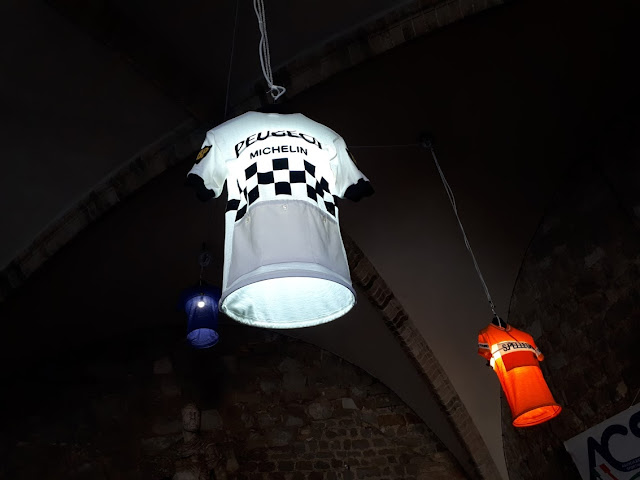 The picturesque village of Montalcino was now peppered with heaps of stalls which had just popped up out of nowhere, selling all sorts of things that none of us needed but that we all wanted. 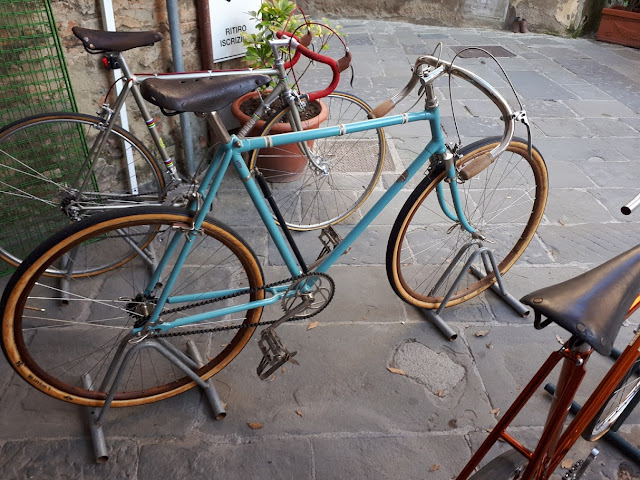 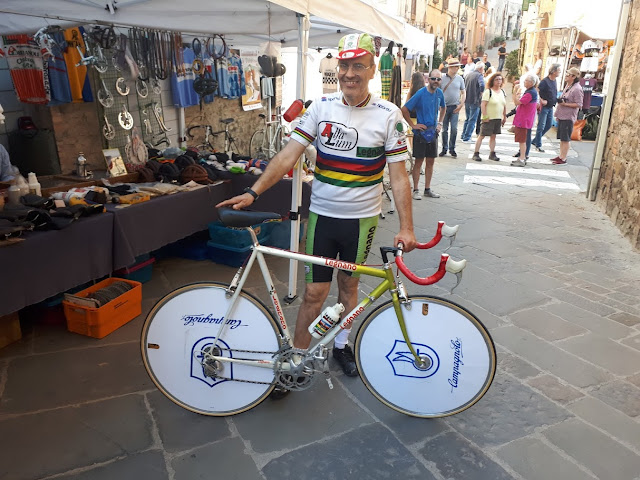 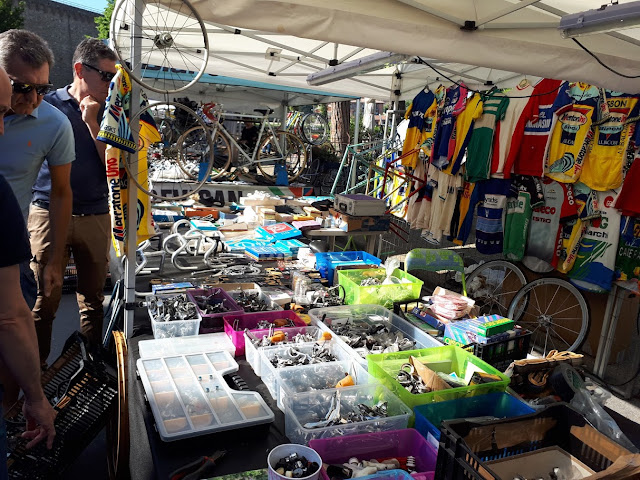 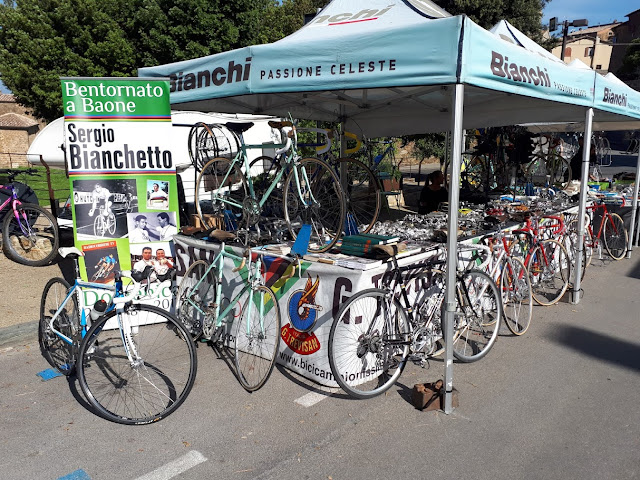 The pre-ride meal had been spread out over several locations through-out the town. There was wine, great food, good company and some very exuberant accordian playing and a fair bit of serenading. On the way back to our accommodation we came across more festivities out on the street with revellers toasting the Eroica founder Giancarlo Brocci.

The day of the ride turned out to be a beauty, not too hot, sunny with occasional overcast patches. There were several distances on offer, 27km, 46km,70km, 96km and the 171km route. Darryn was doing the 96km ride, but I had decided that if I was coming this far I was going to do the big one. I hadn’t done the amount of training I needed to do it comfortably but was hoping to fake the last 71 kms! The two longer distanced events started at the same time and we rolled out on time. 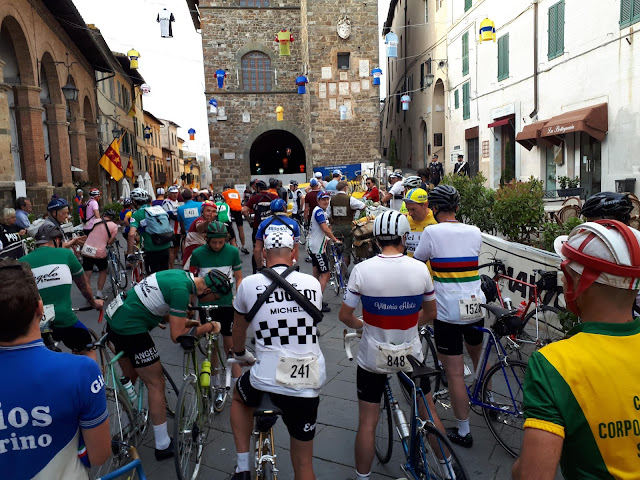 It was a fairly relaxed pace which I guess makes sense for a 171 km ride on old steel bikes. Eventually I came to the first check-point, except it wasn’t. It was the second ! I had blown through the first one thinking that it was just one of the many food stops along the way, some of which were just for food only. The guys in checkpoint two thankfully believed my story, gave me the missing stamp and said I was the first to come through, I was to meet them again later when closing off that loop from the other direction. The checkpoints had all sorts of lovely food on offer and I forced myself to have my first wine, it would have seemed rude not too.

At this point I was in heaven. Hill after rolling hill, most of them white limestone gravel, the famous Strade Bianchi. The scenery was incredible. 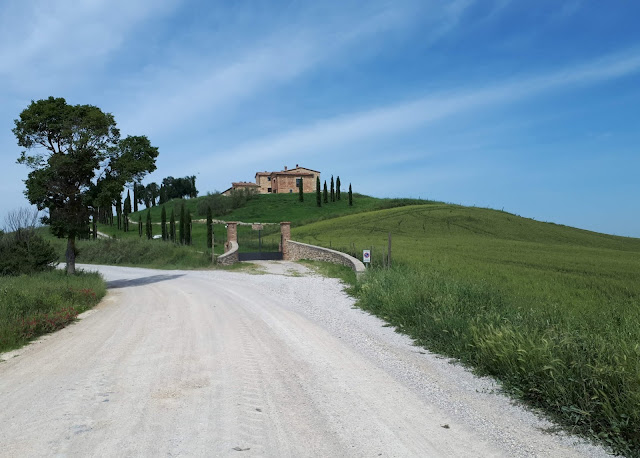 After struggling with the course marking in Eroica Japan in 2017 I made sure I had the map loaded on my Etrex GPS this time. Not that I needed it. The course was marked very well. In fact, the only time I got in trouble was when I watched the GPS too closely and missed the signage which was often slightly different as we passed through the little villages. 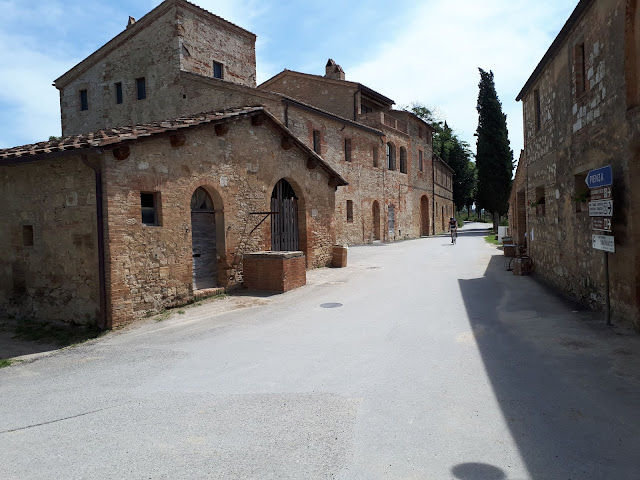 I was still running the same tires I used in Eroica Japan, the Specialized Roubaix 30/32’s and there were great. Robust as hell on the rough descents. Probably not period correct but really comfy. My much maligned Mafac Competition brakes were also great. I only had the one moment when I met a car while bombing some Strade Bianchi and I panicked and swerved left, a bad move in a country where they drive on the other side of the road.

I thought I was keeping on top of my nutrition, there was plenty of food available, even if some of it wasn’t your normal endurance riding fare. After a long time riding by myself I started to catch up with some of the slower riders on the other courses which overlapped with mine and we headed for the really steep stuff, which the organisers had thoughtfully saved for the last 50 or so kilometres! None of these guys were riding, they were all pushing their bikes up to the checkpoint. It was damn steep, well, it felt steep after 130kms, I think it was the Castiglioni del Bosco Narciarello. I was determined to ride it, but it was hard work in the heat and I probably paid for it. 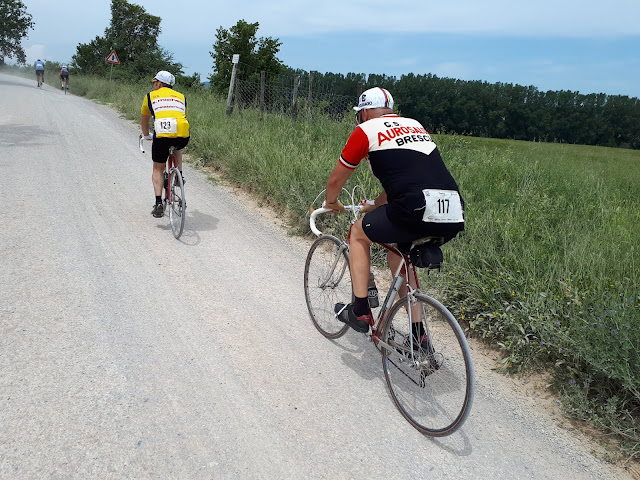 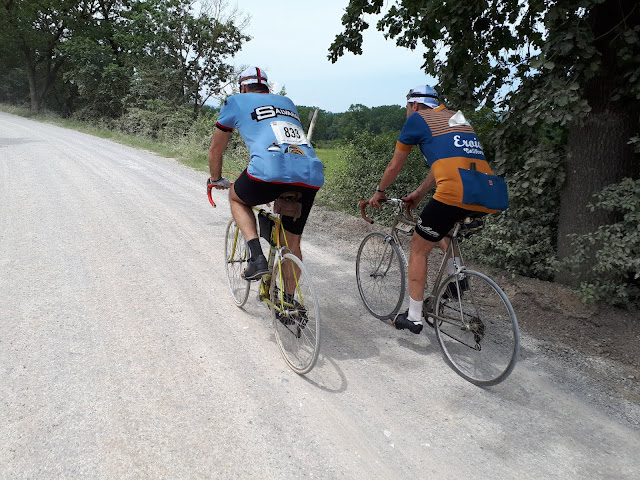 I must have been running low on glycogen and suffered some brain fade as when I came through the next town I missed the signs and ended up back-tracking a couple of kms.

The day was starting to drag, and there was another really nasty hill coming up. The things that I was in love with 8 hours ago, hills and gravel, were starting to feel very old hat. I was bonking. I had to get off and walk near the top. I’ve only ever done that once before and I didn’t like it. I was cooked. In situations like this you hate yourself for feeling so weak, but the reality is, you have just run out of energy. 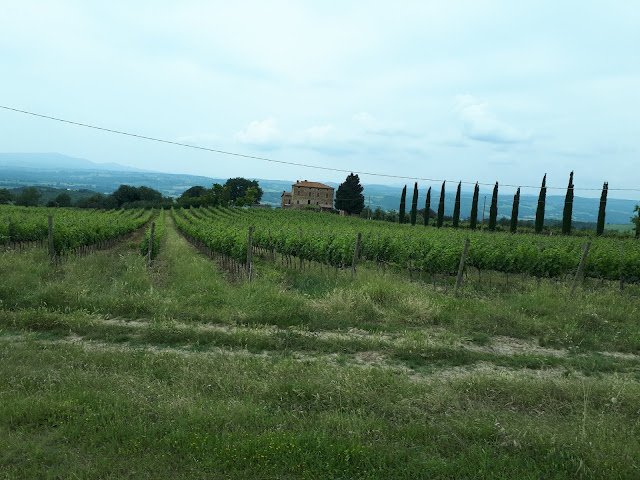 I pushed my bike up the cobbles to the checkpoint, somehow knowing that I was 169kms, into a 171km ride, but also realising that in fact, I was a long way from finishing, because this was obviously not the last checkpoint! 10kms remained. Faking the last 71kms hadn’t quite paid off, as the ride was now 181kms! I watched as the guy who had been catching me everytime I back-tracked got his card stamped. He was doing the long ride too. There was nothing to do. I sat down and and had a cold drink and stuffed a bit more food into my face. I tried not to think about what the last extra 10 kms of the ride involved. I imagined another 13% gravel climb, but to my surprise, when I finally rolled off again, it was smooth fast tarmac, and  my legs had mostly returned. Bye bye Castelnuovo dell Abate, hello Montalcino ! 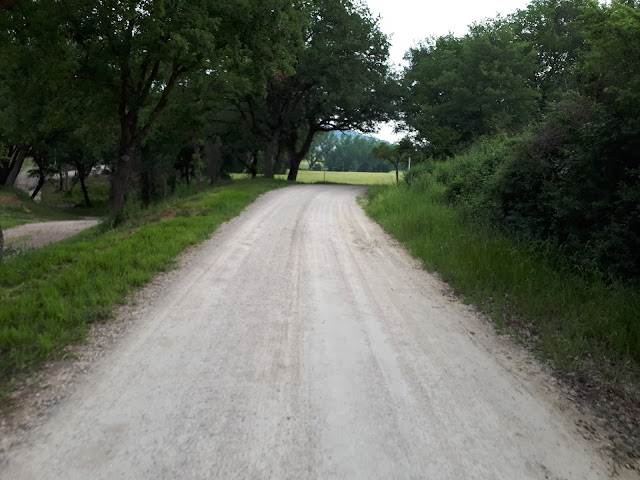 When I rolled over the finish line and got my last stamp Darryn had been there for quite a while, having finished earlier near the front of the 96km bunch. We had a relaxing beer and we went to clean up. A couple of hours later we had hunted down the all day pasta party and Darryn’s wife Yvonne recognised the two guys who were responsible for the serenading and accordian playing the night before! To our surprise they were not just the entertainment, they had also ridden Eroica! Yvonne told them how much she enjoyed their performance at the dinner the night before. Next minute the accordian was out and Yvonne received a heart-felt serenade of her own! What an experience. They couldn’t believe 4 people had travelled all the way from the Antipodes to Montalcino Italy for a vintage bike ride, a private serenade made it just that little bit more worth while. 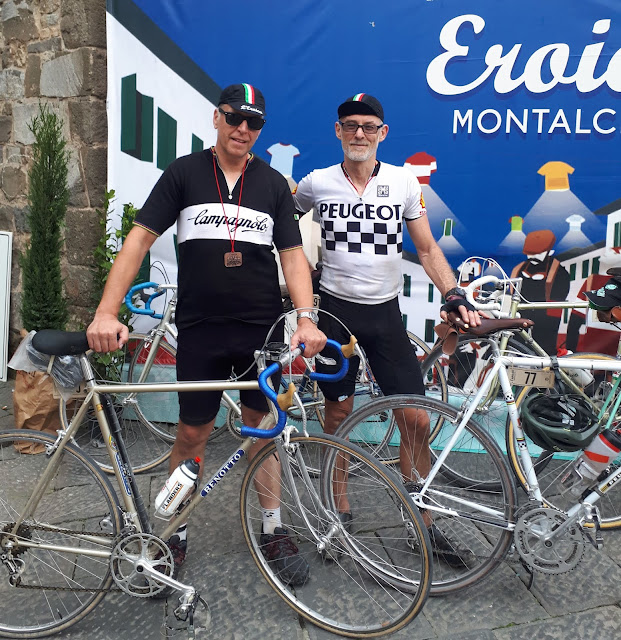 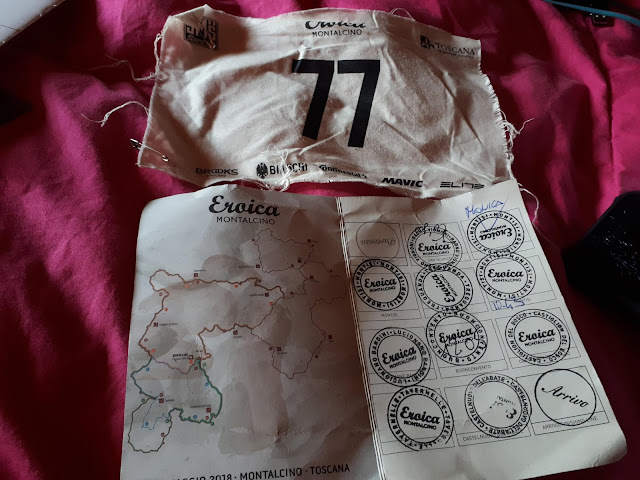