When Giancarlo Brocci started an event called Eroica in 1997 he
had no idea it would morph into the runaway success it is today. It grew
from his passion for two things, preservation of the white gravel roads
in Tuscany, (the Strade Bianchi) and giving recognition to the bygone
era of cycling where technology was arguably less important than the
heroic deeds of the riders. Eroica is Italian for “heroic”.

The
Eroica rides are now found all around the world, at last count 10 events, from South Africa to Japan. The phenomena has started a revival
in interest in the old school steel bikes of yesteryear. There are
several categories in Eroica, but to put it simply, the bikes should be
steel with down-tube shifters, older than 1987, or at least built in
that style.

When the Japanese Eroica dates lined up
with the potential for a family holiday in Japan, it was a done deal for
me. Fortunately my buddy Ray had just given me the Peugeot PX10 that he
bought new in Paris in 1974, and it was ripe for restoration.

We started our 16 day holiday of Japan
from our base in Shinjuku, in the entertainment district of Tokyo. We
would leave my bike gear there in the hotel after Eroica as we made our
way around the rest of the country. This is always an issue for people
bringing a bike in for such an event. Space is in very short supply in Tokyo, so
our initial accommodation was based very heavily on them being able to
look after my bike while we were away sight-seeing. It was not a
problem at E-Hotel Hishagi Shinjuku.

If you are travelling in Japan for any
amount of time you would be silly not to get a Japanese Rail Pass. It
basically gives you unlimited travel over 95% of the country’s extensive
rail network and even the odd Ferry. You will likely get to travel in
one of the Shinkansen trains at up to 284 kmh!


Eroica
is held in the Yamanashi prefecture, at the foot of Mt Fuji. The main town
there is called Kawaguchiko, (or FujiKawaguchiko) which we shortened to K-town, because we
were lazy. The main Lake is called Lake Kawaguchi, but the
accommodation we stayed in, a Ryokan, was on the shores of Lake Saiko
near Saiko lyashino-Sato, a traditional village which was recreated
after a devastating typhoon induced landslide in 1966. The Ryokan are
traditionally styled accommodation with tatami mats and futons for
sleeping on with shared washing and toilet areas.

We
really enjoyed the Ryokan experience and its proximity to the
Eroica HQ and start/finish area was a real bonus. When we signed up online, via the Eroica website we were
able to tick the breakfast option which was essential as we had not realised that there were no shops in the area. Dinner is not normally available at our Ryoken but our hosts, 3 generations of one family went out
of their way to make a lovely meal for us on our 2nd night, our first
night’s meal being the sumptuous buffet at the official Eroica dinner
the night before the ride. This was held at the Lake Hotel Saiko, which is the other main accommodation promoted by the Eroica people. I made a bad start when meeting the 80 year old matriarch running our Ryokan by wearing my shoes in the wrong place, but she eventually forgave me. One of the things that we found to be essential on our travels was our Sakura wifi hotspot. Basically a tiny cellular based device that fits in your pocket. Wifi everywhere you go. I went for the 1.2 gig a day option but even with the two of us using it and watching the kiwis in the MTB world cup, we never used more than 600 mb a day.

Because we arrived on a
train from Shinjuku Tokyo we didn’t really have any transport as such to get
us into K-town for supplies or meals. There are very limited options in
the Village near the HQ but there are a couple of Tourist Buses that run
loops around the lakes every hour. This was how we got back and forward
from the K-town train station, where there are very helpful staff with all the relevant tourism info. Remember, Mt Fuji is not far away. If you were staying for a few days a rental car would be the best option for most people. There were also special buses put on by the Eroica organisers to ferry people back and forward from the HQ and Ryokan to the Hotel Lake Saiko which was only about 2 kms away.

Eroica Japan has been
running for 5 years now, initially under a different name, Eiyu, and so
far it is still not over-subscribed. With around 350 participants it
still has a very friendly feel to it.


On the day of
the ride Fuji-san was hiding under low cloud and would remain that way
until the next day. It just added to the atmosphere, the rugged
surrounding hill-side forests jutting out of the mist.

In the
start area were the same stalls from the sign-in at the gymnasium (HQ) the day before. 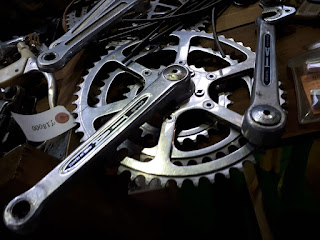 Local and international companies were there with the kind of trinkets that appeal to obsessive vintage cycling enthusiasts. The Samurai Bar Tape people had a nice product and there were vintage parts from different eras for sale.

Eroica is not just about the ride, there are also talks and of course the “Concorso d’Eleganza” where the serious collector’s put their bikes out there to be judged by the experts.

The Mavic tent was a
must to get those last minute tire pressures tweaked after you had lined
up for a quick vetting to make sure your bike was up to spec. Queueing
was half the fun as you admired the bikes of your fellow riders.

Riders
were set off in groups of 10 until they were all gone. The 3 different courses
were mostly on flat to gentle gradient smooth sealed roads with picturesque lake-side views. Winding our way around
the lakes was very pleasant and the few small off road segments that
connected the different parts of the course, were a high-light for me,
several of them exposing rich volcanic soil, the complete opposite of
the white Strade Bianchi limestone roads of Tuscany.

I
rode with a young Japanese guy for a lot of the time, worried that I
might get lost if I didn’t have a buddy who spoke the language. Sure
enough, despite the best work of the marshalls and having an interpreter
we still managed to do an extra 12 kms, riding around lake Motosu twice, but in
two different directions. For anyone considering Eroica Japan, I would
recommend a GPS or phone, you can always keep it in your pocket if it
looks too hi-tech. Maybe having a figure-8 section in the course is not a
great idea?


During the event there were several main
check-points that sported chairs for relaxed dining and an assortment of
food ranging from noodles in soup to biscuits and fruit. At least one
check-point had a shrine, and an Aussie friend I met ended up riding
with a local rider and got to partake in the ritual that they do when visiting
such shrines. Some locals carry a little book in which they can collect
a stamp from the shrines they visit in their travels.

Fuji-sans
non-appearance was a bit of a let-down, but it’s much the same as any
major mountain around the world, there is always a good chance it will
be hidden under a shroud of cloud. 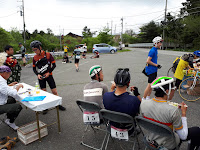 The course was not as hilly as
expected, as you can see from the (Strava fly-by) with many riders admitting that they had saved themselves for a
big climb, not realising that they had already done it. I was feeling
much the same way at what must have been the highest checkpoint. About
to head off on what I thought was the rest of the hill I was called back
to do a 180 degree turn into a lovely off-road stretch (photo from teamzenyossy), but with the
escort of a little red scooter. The scooter rider kept stopping at the tops of
rises to wait for me which was good, as the signage was becoming harder
to follow as the event wore on. 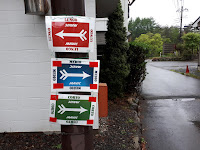 The final part of the
course snaked its way through the built-up area of Kawaguchiko and
finally along the Lake side and back to the start-finish area at Saiko
lyashino-Sato Village. This shot from paolopennimartellicycling epitomises Eroica Japan to me, and it features my buddy Ran from New Zealand on the left. To be fair the total amount of off-road wasn’t much, so it was fully appreciated by me when I got to it. I had previously cut my Compass Barlow Pass Tire with an errant brake pad before leaving home and was running the Specialized Roubaix 30/32 tires which felt great on the mixed surfaces.

Before long the new Japanese
friends I met the previous evening were at the finish-line and there was plenty of
back slapping, congratulations and many photos taken.

You can take your bike on the trains and buses in Japan as long as it has at least the front wheel pulled off and it is covered in a nylon cover. I had no issues at all with transporting my bike through the airlines until it came back to New Zealand and was mishandled by Air NZ staff between Auckland and Wellington.

There
was no Strade Bianchi in Eroica Japan, but there were some lovely
segments of off-road you wont be finding in any of the other Eroica’s
around the world. Combined with a family holiday it was a unique
experience I would recommend to anyone looking for something a bit
different. Japan has a strong culture of cycle touring as well as a
keenly developed appreciation of vintage bikes so you cant really go
wrong.

For the record we went to Shinjuku (Tokyo), Eroica (Kawaguchiko), Kanazawa, Kyoto, Kinosaki Onsen town, Osaka, Naoshima and Hiroshima in 16 days. We used Japan-Guide.com to help plan our trip.