This bike was donated to me by Iggy Ray, who must have figured that if he gave it to me, he would be forced to pull finger on that new titanium bike he has been  talking about for years. Ray gave me the Peugeot at the same time that I was thinking about doing L’ Eroica, a vintage biking event which is now franchised around the world. L’Eroica started as a way to save and promote the limestone roads that are part of the scenery of the Tuscany region. It was also a nod to the “Heroic” era of cycling before electric gear shifting and disposable bottom brackets arrived.

We had our eye on the Japanese  Eroica as it would work in well with a family holiday. My buddies Matt and Ran both do a fair bit of work in Japan and there was a chance that they would make it too. In the end it was only Ran that could swing it, Matt will be a week late. Ran is also riding a Peugeot.

Ray’s bike came with Mafac brakes and 27 inch Mavic rims on some smooth Sansin hubs. Ray bought it new in Paris in 1974. Its a Peugeot PX10. I think the wheels and crank were not original. The rear derailleur was a low-end shimano that had been mounted on a tapped Simplex hanger.

I had a play with it, replaced the crank, after the left arm fell off while I was riding home on its first commute. I reached into my parts bin and found an old Campy Record Strada crank to put on it. I found some 33mm Cyclocross tires, and rode it down the Transient trail in Polhill. I was very impressed with the brakes. I imagine the direct mount ones must be incredible, mine are just the cheaper centre mount variety. 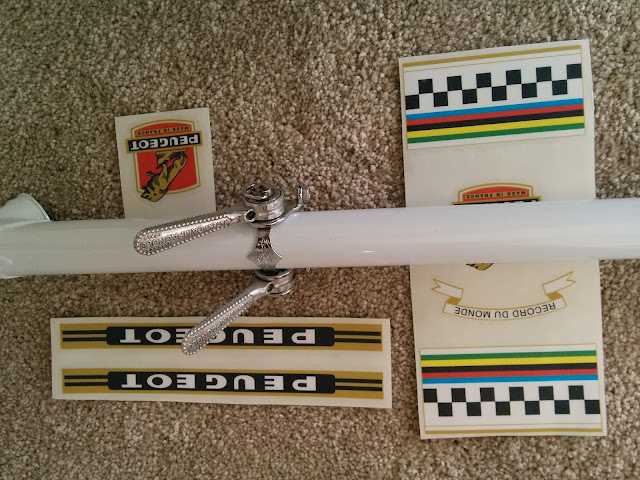 I got the frame powder-coated at Seaview, I’d rate the finish about a 7 out of 10. I got a sticker set from the UK, and my buddy Paul gave me a lovely Campagnolo Nuovo Record rear derailleur and shifters which his friend’s husband used in his younger days. 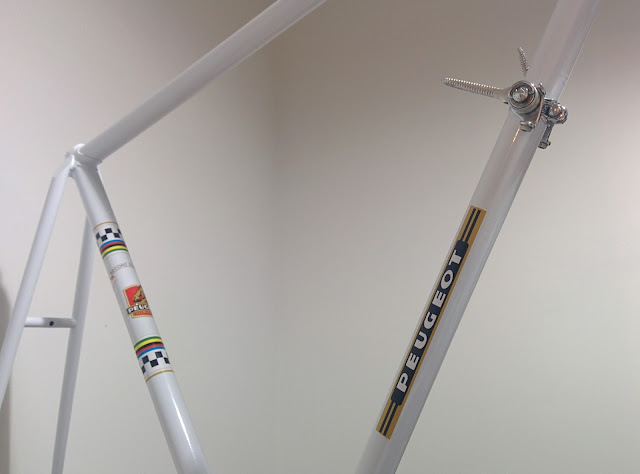 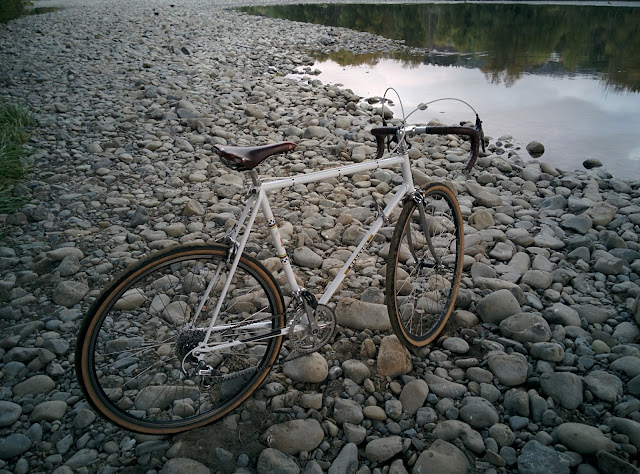 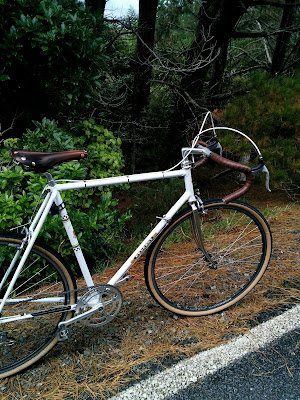 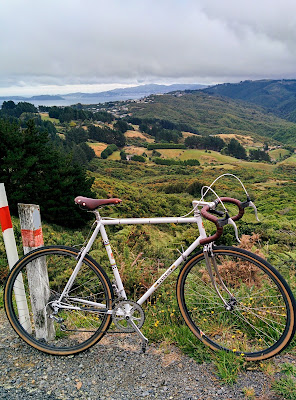 I had a few issues early on with precession, the inherent tendency for a French or Italian bottom bracket to unwind itself, due to their crazy threading direction. Then I had an issue with the loctite I used to try to fix it…. Lets just say its been a learning experience. Everything in moderation…

The bike has a very relaxed feel. Its like a comfy armchair, especially with the Compass Barlow Pass tires on it.  They are actually about 33 mm wide and a lot faster than they look. (Have stretched to 35 now). I came across an old 8 speed 11-30 MTB cluster that seems to work surprisingly well with the Durace rear derailleur which was probably only specce’d to shift up to a 23 tooth? Anyway, my buddy Paul turned up with a donor bike with some more relevant (old and crappy) wheels ; ) so I was looking more and more legit all the time. One problem… the new hub was narrower… Hack time, I took off the 11, put a skinny spacer behind the 30, and now the little sprocket is a 13 !  Hmm, a 49-13 is not that tall for hanging with the Fat Fathers Club ride, so I put the 54 big ring back on. Cue a new longer chain.

I’ve just realised that the only original parts on the bike are the frame and the brakes. But, the only new parts on it are the paint, bar tape, cable guides and decals. Thanks to the many people who donated me the rest, especially Paul Turney, and Dean who loaned me the pedals, and of course Ray.

I have never had so many people comment on the look of a bike as this one, peaking at 3 comments in a 15 minute ride across the CBD one evening!