Brian Alder is off to do the Tour Divide in a few days so I thought I would nerd-out and ask him about his set-up.

Brian, you have a reputation as a bit of a details man. If you broke your prep down into training, bike/kit selection and planning, how big of a part is the planning?

For me route planning has been a large part, especially as the start approaches. I like to know what I’m getting into and try to form a picture in my mind of what is coming up. I don’t have huge lists of resupply locations or accommodation options. I’ve concentrated more on what are seen as difficult sections of the route, what is the nature of the riding and what are the resupply options in the remote places.

Are you are big believer in the knowledge is power maxim?

Yes, for sure. But that’s just because it suits me and puts my mind at ease. I think it’s completely valid to go for a “take it as it comes approach” if that what suits your style. I think it is important to feel comfortable and try to reduce the areas of worry for you personally. Something that has been stressed to me from those who have gone before is to have an open mind and an open approach because the reality won’t match your plan. I’m doing my best to stay loose. 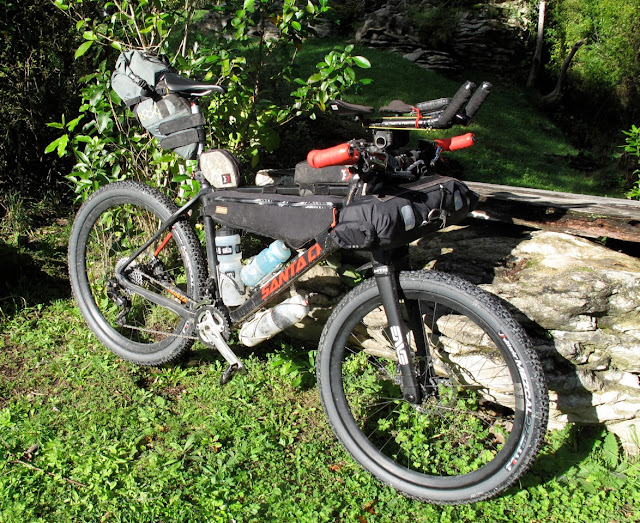 I know you’ve been in touch with 2014 Tour Divide 4th place getter and fellow crusty Geof Blance. Is it helpful to swap notes with someone else who has been there and done that, but is also 50+ ?

Well Geof has just clicked over 50, but yes chatting to others has been huge, mostly to check whether you’re on track with your thinking. I’ve chatted with Nathan Mawkes, Rob Davidson, Chris Bennett, Seb Dunne and Ollie Whalley. Ollie just asked me lots of questions that I seemed to have answers to, which was reassuring. I’m not sure that age is a major factor in the Tour Divide, maybe at the elite end but for a mid-pack racer I think age is just a useful excuse to lie in a bit longer. Riding your own ride seems to be another common theme.

Having ridden with both Geof and yourself I notice you both have very different styles. Geof likes to go hard but also stop for a beer if he gets a chance. Will you be doing that or going for a more steady state kind of approach?

My experience riding the NZ bikepacking events is that if you want to go fast the more time you spend on your bike the better. I’ve also discovered that riding my own pace rather than pacing off others is most efficient for me, so I’m in the steady state camp probably. My goal is usually to ride 16 hours a day, so 5am until 11pm with a few stops in the day. In saying that there are times when it’s worth making a big effort. In this years’ GSB Rob, Russell & I were riding the Clutha Gold trail to Lawrence. After a big feed at Roxburgh we set off at high speed, I suggested to the guys we knock it back 10%, as it wouldn’t make much difference time-wise – it’s fast riding no matter how effort you put in. We saved some energy (mental & physical) for the big grunt out of Lawrence that night, which we smoked. In the TD riding at night sounds like it might be the go as the temperature goes up, so I’ll see how that goes.

I see you are running a 27.5 wheeled Santa Cruz Highball with a rigid fork. Most people are running 29 inch wheels these days, but you’ve been a 27.5 stalwart from day 1. What is your thinking with the goldilocks wheels? Better strength and lower rotating mass all round or is there more to it?

I invested in some sweet Ibis 741 rims for my full suspension SC 5010 a year or so back, so they’re the best wheels I have, so that drove my decision. 29er would be faster no doubt, but I do love the wide rims and the comfy ride they give. Most of my bike selection decisions have been based on comfort, so wide rims and big volume tyres is a big part of that. Again, comfort equals more time on the bike in my mind.

Was there a time when you considered taking the full suspension bike for the Tour Divide?

No, I think total weight is big deal on the TD and I’ve tried to build comfort in where I can. In saying that I don’t think bike selection plays a huge role and I think that history would back that up.  The Highball takes a 27.2 seat post and I got my hands on a Syntace post that has quite a bit of flex and dampening which seems to make a significant difference.  I rode the Santa Cruz Highball in this years’ Great Southern Brevet with a suspension fork and loved it. It handled the rough descents easily and climbed efficiently, so I was totally sold.

What is the thinking behind your tire choice and sizing?

I’m running Vittoria Mezcals 27.5 x 2.25 based on Andrew Scott’s experience with Saguros on the TA. I considered Maxxis Treadlite but they are too narrow as I wanted to run something that would work with my wide rims so I needed big volume. I considered Ikon 2.2’s but the Mezcals set up really big and have a very nice roll to them. Super happy with my choice. Again, I don’t think it’s huge factor, there’s a few other tyres like Conti Race Kings that I would happily use. 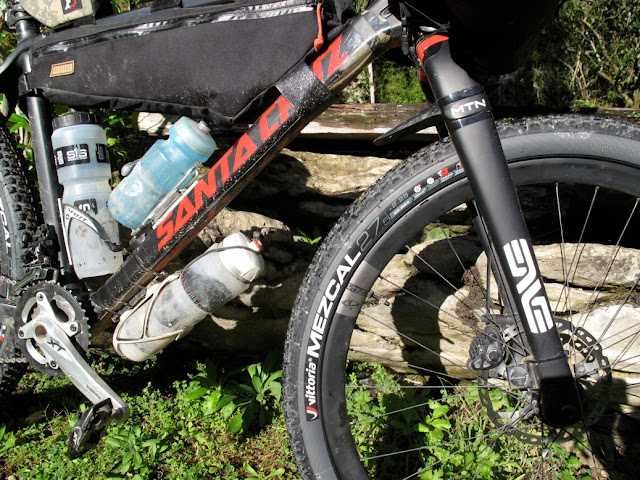 The Highball is a lovely bike, and it still has a traditional screw-in bottom bracket. Is that a plus for you?

Yes for sure. Threaded bottom brackets have a great track record, plus I can work on it myself and most bike shops will have parts. The Highball also has nice relaxed angles, so is pretty stable, especially with a load on and is noticeably compliant under load. The skinny seat post adds to that too. The Highball is relatively short in the top tube which suits my long leg/ short torso body.

What have you gone for with your group set, 2 or 3 rings? What speed and ratios?

Marshal Bird wrote some great stuff on his blog pre and post last years TD. One was called “Don’t bring a knife to a Gunfight”. He rode a 1x drivetrain and it nearly killed him, saying he never had the gear range he needed. He argued that unless you’re really strong, more gears are better. I’ve ridden 1x for a few years now and in 3 NZ brevets and I totally got what he was saying. I rode a 2 x 10 in the GSB this year and it was a joy. I have 38-24 drivetrain and standard 11-36 cassette. I’ve thought about 40-26 rings but have erred on the conservative side.

What are your views on lighting. I’m not seeing a dynamo hub so I guess you are keeping things simple and going with AA’s? What light are you intending to use.

Again having the wheelset already drove some of thinking here, but also dynamo hubs still have reliability issues as do the connections etc. Geof ran a battery-based system (as did Josh Kato) and convinced me it was logistically easy to do, and being slightly technophobe I took the bait. I’m running a standard headtorch with AAA batteries and an Exposure Joytsick which I’ll charge off a powerbank. Lots of spare AA’s for the Etrex 30. I used this system on the GSB and after 4 days still had plenty of power left. I reckon I’m carrying a weeks worth of power supply, so a few motel nights along the way and some gas station battery shopping should keep me charged up. 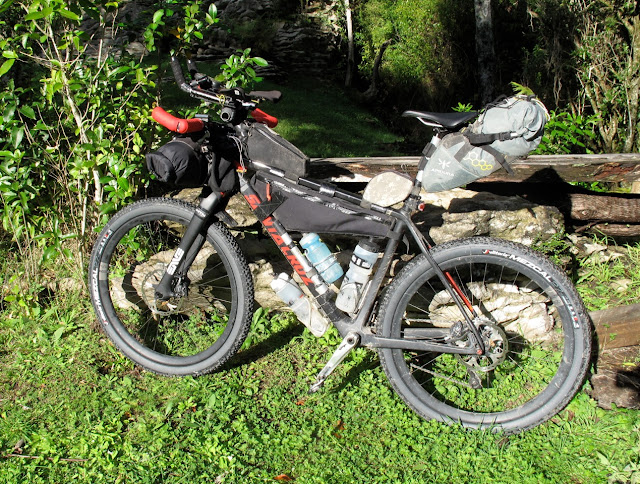 When I rode with you in the Kiwi Brevet you were toting a Revelate Terrapin. You have an Apidura rear bag now. Is there a story behind that or did you just wear the old bag out?
I destroyed the Terrapin hauling too much weight in it while working for DOC, commuting up and down the Old Ghost Rd. The holster/ drybag system is great, especially in NZ with the rain we have. I chose a more standard seat bag as I wanted something that was easy to access during the day as I’ll have my spare clothes in it. I found that with the Terrapin I’d put off getting stuff out as it was a bit of a hassle to open and close. On the last day of the Kiwi Brevet I rode with you in 2012, we were descending off Island Pass on a cold morning. I froze my butt off because I didn’t want to stop to get more clothes out as it would take (what I thought was) too long. My current bag set up is a lot about having ready access to my gear at short notice.

You seem to have settled on one of the Specialized Power saddles. Has this been a revelation for you, or just another saddle that works better than the last? Did you use it when you did the last Great Southern Brevet?

I been through a progression of Specialized saddles, each better than the last. Their loan system has been a big part of that. I used it on the GSB and it was good, but still had issues and there’s lots of pushing in the GSB so it’s not a true test. I like the look of the Brooks Cambian saddles but haven’t committed and put the time in. I wish I had Geof Blances butt which fits a Brooks saddle…. 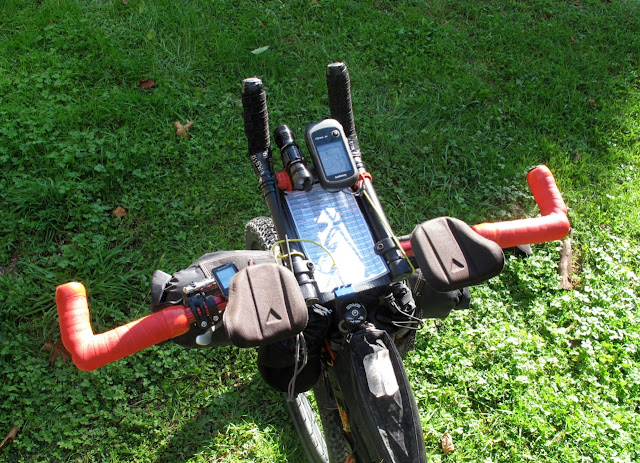 It’s looking like its going to be a very competitive year with Josh Kato, Liam Crowley and Mike Hall rumoured to be lining up. Its hard to imagine it getting any closer than the 20 minutes that covered the top 3 in 2015, but here’s hoping.

Yes, the front end will be very competitive. Add in Seb Dunne from Canberra, Tom Roundtree who won last years Highland Trail Race, Chris Pleisko who is out to break his own singlespeed record and the usual dark horses and the front end will be fast. I’ll say goodbye to Seb in Banff as I don’t expect to see him again after that!