Last friday I came in to work early with the idea of sneaking out early and doing another evening ride. I reckon its a great opportunity to test gear in its intended environment. I had plenty to test. Once again I had oscillated from my Karate Monkey to the plastic fantastic Giant XTC. It has all the personality of a tupperware container but the frame weighs about as much as the rigid front fork on my Karate Monkey. At the last minute I “Pocketed” a few stories from the Inspiring riding site, onto my phone so I could have them “TTS” read to me by the robotic English woman, whose voice I had chosen, and I also downloaded a couple of podcasts from an MTBing site to keep me company.

I was going to do the “Big Coast” a loop from Lower Hutt and across the Rimutaka incline, down the side of Lake Wairarapa and back along the south coast.

Given that it was reportedly a southerly I was a bit peeved to be experiencing a bit of head wind as I headed north up the Hutt Valley, not a lot, but enough to make it less enjoyable. The first podcast I started listening to was about Bikepacking but after they mentioned people cranking out 400 mile days it kind of lost a bit of credibility with me. I hung a right early on and elected to take the hilly approach to the incline rather than the usual drawn out flat one. It had been ages since I’d gone that route. It was a welcome change. It was my first ride with my new Stealth frame bag, and I was also testing a couple of Klite

Kerrys 3d printed anything cage mounts. A couple of things were immediately obvious. My actual bottle cage was crap, it was scrounged off a TT/road bike, and every time I pointed downhill in the rough, the bottle fell out. The other thing was, the Giants top tube was a lot higher than the Karate Monkey’s so the GTB (groin to bottle) clearance was not ideal. The Klite anything mount also added a bit of height. The last time I had a bottle on my top-tube is was on a much smaller frame and was mounted directly with radiator hose-clamps.

I was enjoying Andy Kerr’s Inspiring Riding tale about custard squares as I was grovelling up those first climbs, but decided to save the rest of the stories for “optical” reading, as a fair bit gets lost in translation with Text To Speech.

I came across a woman on a touring bike part way through the Incline. Her bike was fully loaded and it had taken her all day to get from Wellington to part way up the Incline.

By now I had switched to AM radio for entertainment. 567. Yes RNZ. I banzaied my way through the Incline’s tunnels with my dynamo lights blazing away. When I made it to Cross Creek I was surprised that it was 6:30 and I had been riding for 2 hours 40. I guess I had been stopping a lot to take photos.

It was a lovely day in the Wairarapa and I was down on the aeros all the way down the side of the lake, and past the turn-off to the Ruamahanga 50, the site of one of my most favoured events.

It was actually pretty cold, but more as a result of speed induced windchill into the southerly I think. I had already stopped to put on a high necked poly-prop at Cross Creek, and I still had rain pants. leggings and a rain jacket at the ready should it get nasty. In hindsight I should have thrown in my bivvy sack and sleeping bag as well, its not like they take up a lot of room, and I had plenty spare.

I stopped at the top of the hill before the descent down to the coast and texted my daughters to say I would be a bit longer than I had said. 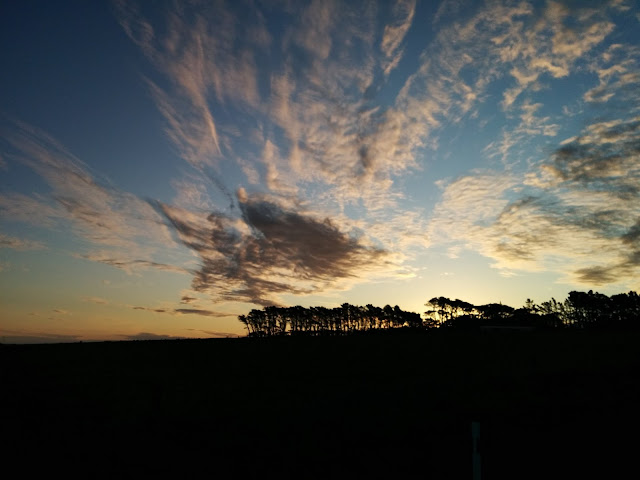 I got to the coast and started noticing the rabbits everywhere. There is a real problem over there. Lots of young ones. A few people had already turned up to their holiday baches on the Coast and were settling in for the weekend. I’d been pedalling for around 4 hours 15 at this point.

The sun started to go down which added to the ambiance of the ride. I bowled through the Corner Creek camp site. No one there. Its my favourite time of the day to be riding, dusk. The Revolution light/SP dynamo  was more than up to the task but I knew it would be useless soon enough when I hit the stretches of unrideable deep sand and scree. I flicked on my 10$ head torch and grunted my way through the gnarly scree. I knew there was a fast line through it somewhere, but I had no idea where, its hard enough to spot it in the daylight hours as it is. The track seemed to disappear a bit at times, maybe due to some heavy rains earlier in the week. Somehow I managed to find my way across the river/stream with minimal fuss, barely getting my shoes wet.

Even though the thick sand and lumpy scree is slow going,  within a couple of hours I was at the Orongorongo end of the trail. Part way along the coast I had got a few texts from the kids when I surprisingly ran into some cell coverage. I had set up my phone with the “Wheres my droid” app.

If anyone texts me a special predetermined word, the phone messages back to them with my lattitude and longitude in a clickable link which will open in Google maps or a web browser. It only works if you have your GPS on, which it is by default if you are using Strava, but you also need cell coverage.

So now I was at the Orongorongo farm, and out of cell coverage again. I decided against doing the proper Big Coast course, over the hill and around to Pencarrow, as it was already late, and so with a slight tailwind I got down on the aero-bars again and motored along, destination Wainuiomata. That stretch bores me to tears, but I had to keep alert, as on 4 separate occasions I was attacked by marsupial suicide attack team of possums who shot out from the side of the road and nearly took me down. Maybe my dynamo light was attracting them. They seem to be inherently more stupid than a rabbit as far as road sense goes and their bow-legged gait has got to be more useful for scaling and decimating native trees trees than negotiating 3/4 chip at speed.

I called in at the first gas station at Wainuiomata and squaffed a coke and a hot coffee. I felt like a strange alien impostor as I witnessed the banter between the locals and the staff. I most likely looked like an alien  with my thousand yard stare and flashing gizmos on my lid. “Take me to your barista!” I had probably already eaten about 5 muesli bars from the expired stash recently inherited from my work and less than 2 bottles of water and electrolyte drink at that point. 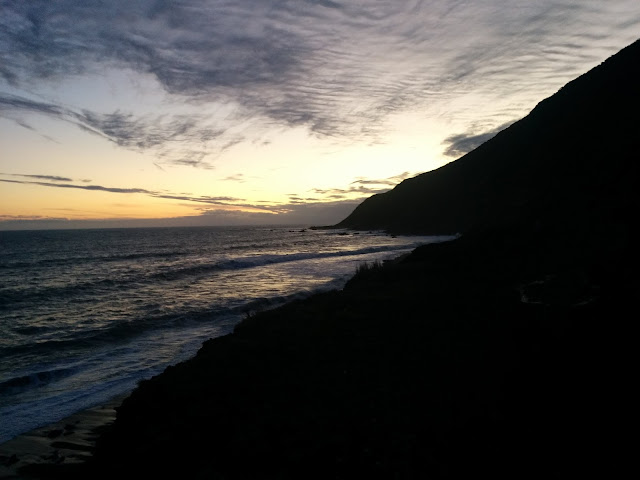 I got a text from Ash to say she had cooked me a nice tea for when I got home. With my caffeine levels topped up I scaled the Wainui Hill and opted for the trail down the other side rather than push my luck with local Friday night bogans on the road proper. I have to say everyone was on their best behaviour that night. The Coast road can be a scary place on the wrong day.

At 11pm on RNZ they were playing an hour long doco on the Legendary Sun Ra who I had only vaguely heard of. It was a pretty interesting listen as I rode along by myself into a the Wellington CBD.

An hour later at 12.00 on the dot I staggered down the stairs and knocked back the delightful meal I found waiting for me. Thanks Ash!  8 1/2 hours after I had left work I was home. 148kms under the belt and some lovely terrain covered and gear tested. My legs felt great on my final climb up the Brooklyn  Hill and I had no significant gear issues. My shorts were mint. No chafing anywhere.

The plastic fantastic did the job. But do I want to ride it for up to twice that amount of kms a day in the upcoming TA ?  Maybe my next big coast will be on the Karate Monkey again….