The Great Rimutaka Bike eXperiment #GRBX was a social media experiment that paid off in spades for the guys at Inspiring Riding, if empowering people to get out and ride into a stiff southerly is any measure of success! It was great. Around 50 people were there on all sorts of rigs, beta-testing all sorts of gear, some in anticipation of their next over-nighter, but many in anticipation of the TA (TourAotearoa) being held next February.

I was looking to trial my new dynamo set-up and I was pretty happy with the results. Mind you, according to Strava I averaged 23.4 kmh. That is not a sustainable Brevet/Bike-packing speed for any human I have heard of. And to prove this, I imploded at the halfway mark with the biggest bonk I have ever experienced. My latest special toastie pie recipe which was a special blend of Cheese and Smoked mussels was suddenly repeating on me and seemed less than desirable.

I managed to keep the contents inside my stomach, but my pace was so slow, as I rode the “Incline” that I wasn’t pedalling fast enough to generate power from my dynamo to power my lights through the first tunnel. I could see lights alright, lots of small twinkly ones!

A caffeinated GEL at the top restored my mojo and I was shortly back to normal.

I had purchased a top-tube bag off Michael at Stealth Bike bags a few months back but he said if I waited a while he would do the new one with the new slinky water resistant zip. He turned up with it at the start so I eagerly velcroed it on.

I was testing my dynamo charging system so aligned all the goodies inside the bag as well as I could and put it all in another plastic bag. There was the Sinewave converter, my little battery holder, and a 3100 mah battery, and my phone. Before I started, I estimated that the 3100 mah battery was mostly charged, and the phone was also mostly charged. With an average speed of 23.4 kmh I would have been generating a reasonable amount of watts (for charging) and at the end of the day, the phone was fully charged at 100%. The idea is that at the end of the day, this battery or one of the other 2 I will be carrying, can be put into my head torch, should I need extra lighting if negotiating slow single-track at night. They can also be used as a power-bank. 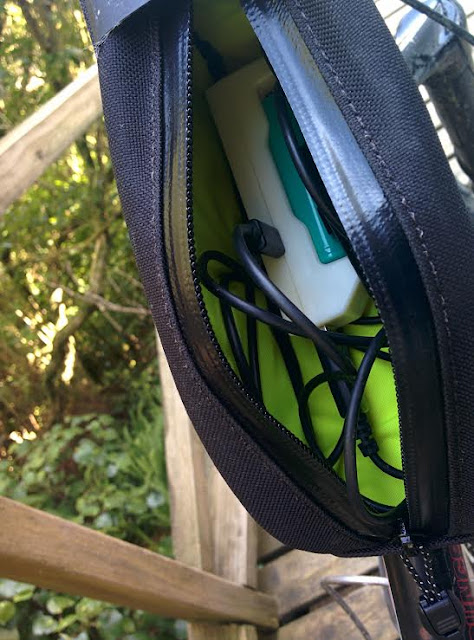 I took the battery out today and it lasted for 6.5 hours in my torch, on the medium setting, so without getting all technical, that implies I didn’t bleed too much power, overall. You wont see any photos from the ride. Why?

The order of the bikes across the line, not neccessarily the fastest order, as people tended to leave at different times.

More “peer-reviewed” info to come when all the data has been analysed by the gurus at Inspiring Riding. Thanks guys. It was great.

Like!! I blog frequently and I really thank you for your content. The article has truly peaked my interest.