My long running fascination with the adaptability of the Surly Karate Monkey reared its head again recently and I made plans to revisit my earlier attempt at the unofficial Karate Monkey World Land Speed Record. The previous attempt resulted in a fairly pedestrian 35kmh average on a “sporting” course to use the parlance of the Time Trial crowd. 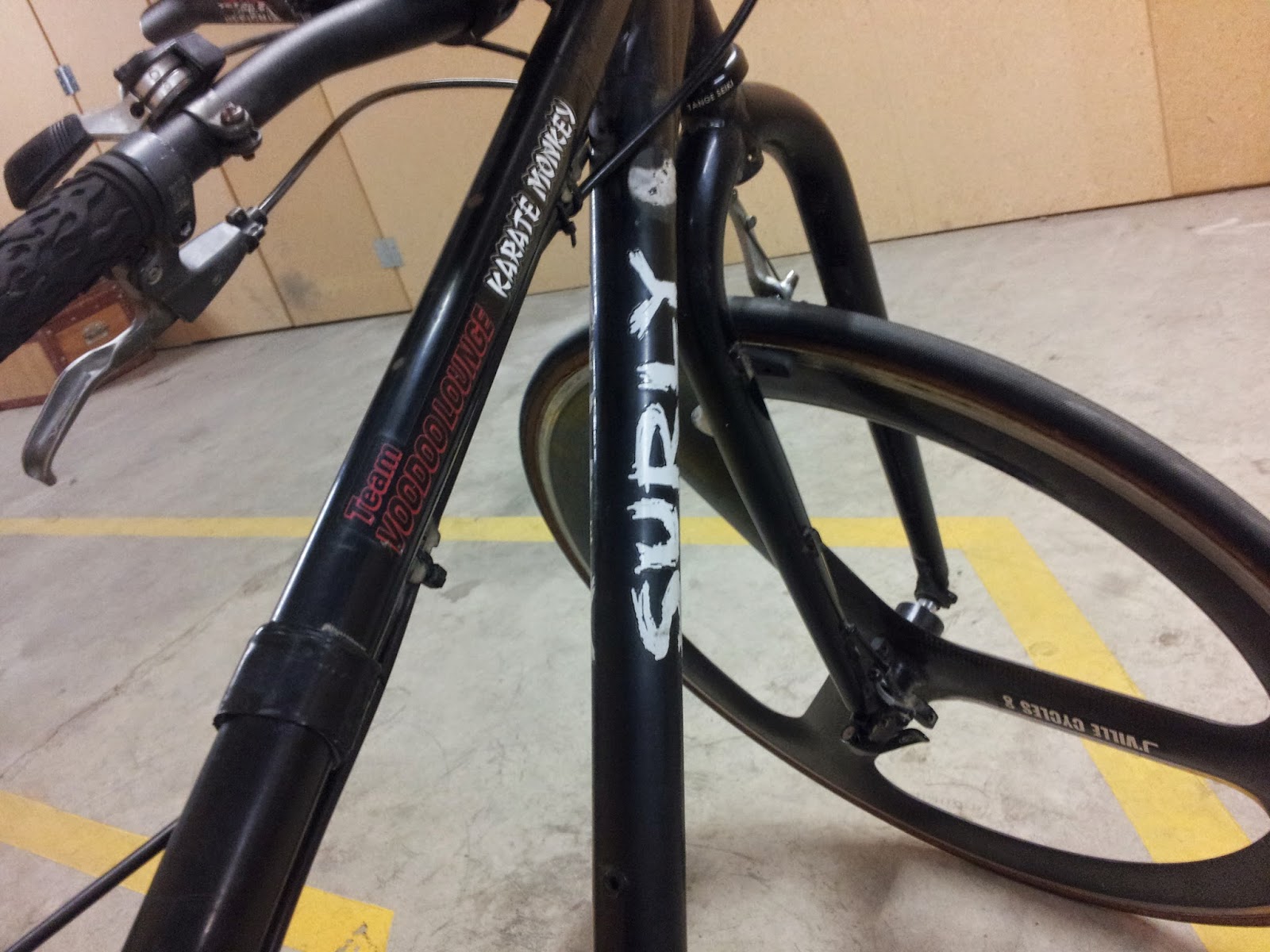 This time I was going to go all out and use my HED 3 trispoke (in honour of the late great Steve Hed), and my rear power-tap wheel with disc covers, that way I could use my power-tap for monitoring speed, (and power) plus it was easier to strap the PT harness on than going online to try and work out how to change the wheel diameter on my insufferable bike computer. 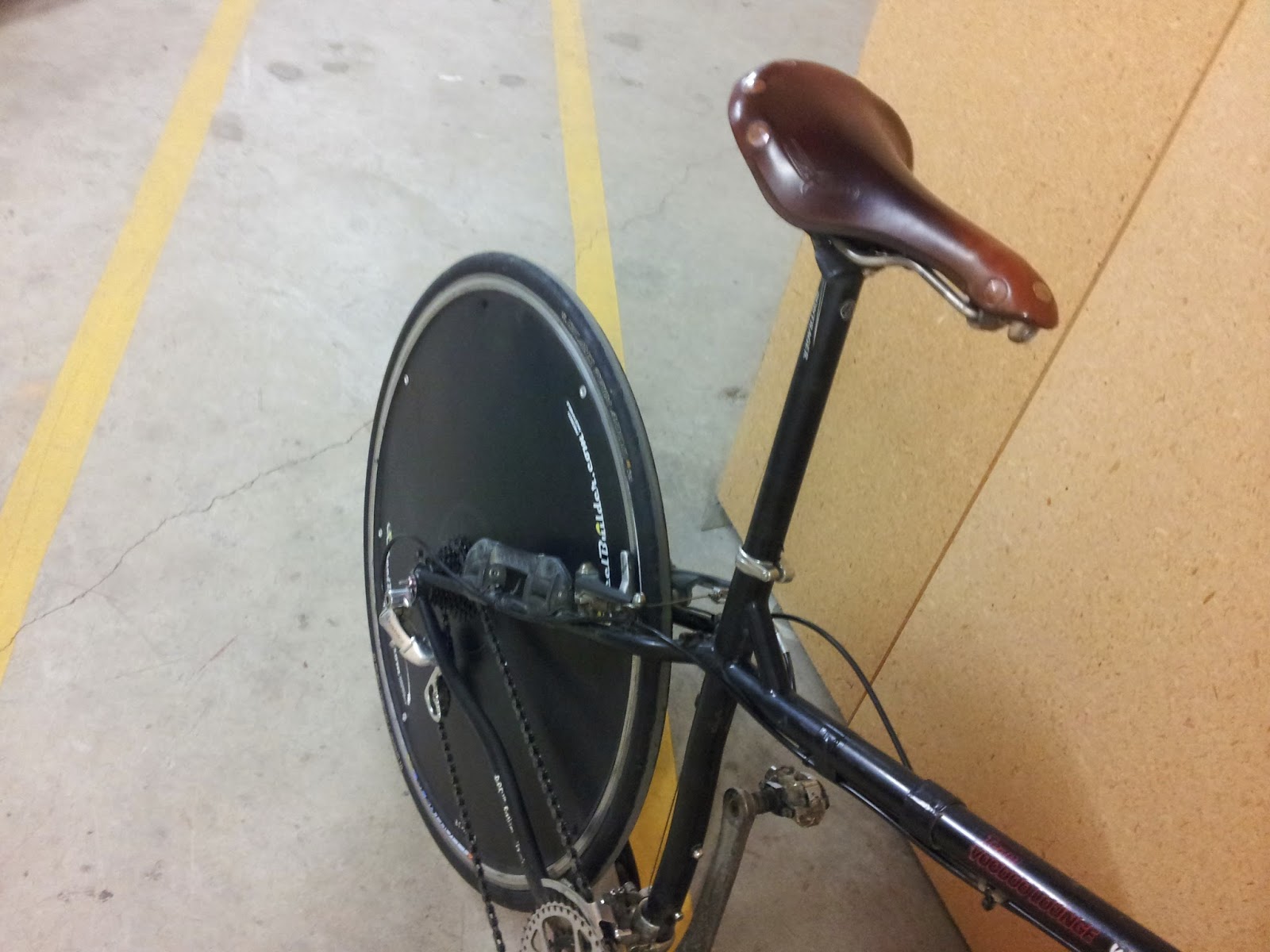 At the last minute the battery in my Power-tap hub died so I was going to have to race the time trial totally by feel. Not that that would be a problem. I’ve probably done more laps on the 5.9km Liverton road circuit than most people. Even so, I got a surprise when I glanced down at my watch to see that I had done the first lap in under 8mins 20 (which equates to about 42kmh). I had no idea what top speed I was doing with the 9kmh tail wind, but the 48-11 had me spinning a good cadence that was neither too high nor too slow. Just right, and proved to be a good governor to stop me blowing out my legs by pushing too tall a gear. I just needed to try and keep it together on the undulating return legs into the southerly.

I hadn’t done a time trial for almost two years as I was injured the previous summer after the Kiwi Brevet and that particular pain that you get when TTing was like being reunited with an old friend. Pain is your friend.  I was very happy to come in at 4th place with an average of 41.4kmh, surely a new SURLY Karate Monkey land speed record?

The next week I took my “proper” Bianchi time trial bike out and raced, knocking a massive 7 seconds off my Karate Monkey time over 23.4kms. Which goes to show, dedicated time-trial bikes are faster, but the aero position did some damage to my nether regions which took 3 days to come right. Speed has a cost! The Brooks saddle on my Karate Monkey was like an armchair by comparison.

I replaced the batteries in my Power-tap for the 2nd run on my dedicated TT bike and got an average of 276 watts. A long way from the 302 watts that I once maintained for a 45kmh average on my Bianchi (in good conditions). I’m keen to try it again on the Karate Monkey (with power) and see if the more relaxed position nets me more power, which in turn gets soaked up with the poorer aerodynamics. If I find that the power is similar, it would imply there are a lot of things I don’t understand about aerodynamics.

Once again, it appears the Karate Monkey is the do-everything bike, although I believe that if you want the same bike today you have to buy the Ogre. The new Karate Monkey Ops loses the canti studs and bosses.

The day after the TT the Karate Monkey was back in commuter mode, and the next weekend was in full Dirt Brevet mode for an over-nighter with my wife. Try that on your Specialized Shiv !

Contact me if your Karate Monkey is fast or faster and we will start a leader board.

If you think I might be in need of medication, check out this guy. He is the UK 12 and 24 hour Time Trial champ and his bike is a custom made MTB that he commutes and tours on.  It’s so similar to my Karate Monkey I couldn’t believe it when Andy Kerr sent me the link after my latest TT.