Return to Mount Climie – With pix by Ricoh Riott.

A couple of weeks back I was looking through some old piccies from back in the day. I found a goodie of local rider Jonny Waghorn descending Mt Climie on his state of the art (at the time) Yeti so I scanned it and posted it on Facebook. A a bit of banter ensued and a few weeks later Kim Hurst announced a project she had been mulling over for a while, a fundraiser to help get her favorite wrench and world renown botty grinder (Ricky Slack-boy Pincott) overseas for some hi-end wrench-action at the World 24 Hour Solo MTB champs. The plan was to create a grass-roots homage to the original Mt Climie Hill Climb/Downhill event that used to precede the Karapoti. There have been some pretty famous riders take part in these events including David Weins and Dave Cullinan from team Diamondback. The Climie uphill/downhill combo was also used to great effect in the two-day Tour De Tunnel stage race that the Kennett bros introduced in the early 90’s. The 610 metre climb is a beauty but you are very lucky if the weather at the top is good.

Some people really got into the spirit of it dragging out their old retro bikes and trying to relive the day. Jonny was on his still original Yeti with admittedly a bit less travel than he had back in the early 90’s, and Simon Kennett had also recently just come across a new (old) bike which was the same as the one he campaigned the nationals on in the infancy of the New Zealand MTB scene.

The Downhill guys were also out in force obviously although I didn’t know many of their names. Upper Hutt local Ed Banks was there. Ed is always up Climie, anytime there is a chance of snow he’s up there like a rat up a drain-pipe.

You could ride each event separately or together with lowest combined time winning the Mountain Ninja Class.

Steve Bale was taking it pretty seriously forgoing handle bar grips for skate-board deck tape. It must have been fun descending on his 8kg rigid bike with those. Hopefully he had some well padded gloves.

One of the most exciting rides I saw was from Lee Campbell on his Specialized Fat-bike. He had been terrorising the Cyclocross fields for the previous few weeks on this machine and despite having no suspension as such I think there were only about 3 riders in the “Mountain Ninja” Class that descended faster than him. He went past me in a blur like an out of control Monster Truck on nitrous. When asked if he had any “moments” he said, “about four”. 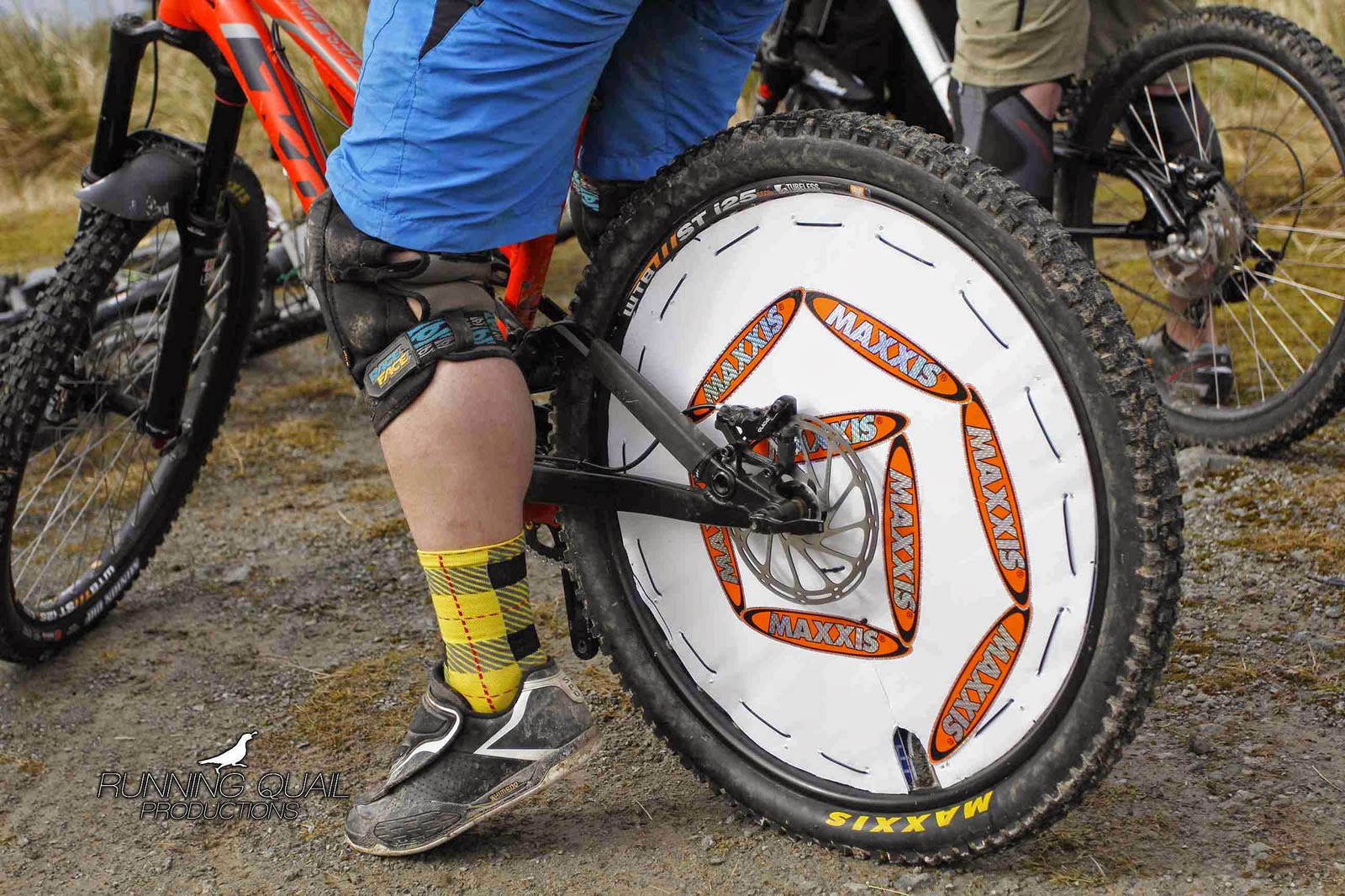 Ricky Slackboy Pincot himself won the Downhill proper with his home made rear disc wheel and we were all treated to some exemplary home-brewed beer from Ricky’s Mud Cycles cohort, and home-made baking back at base-camp. 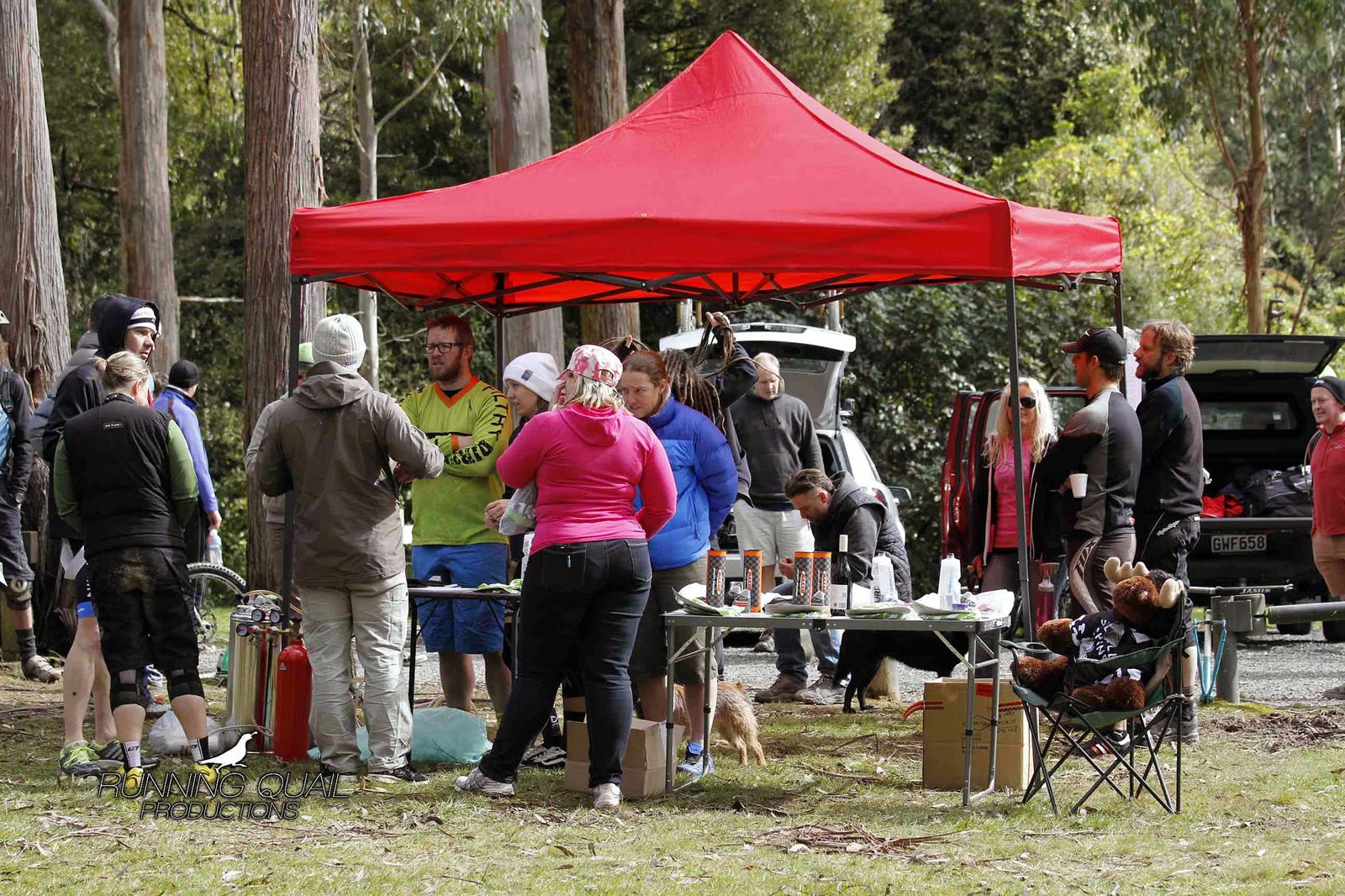 This is not a tale of epic endurance and sleep deprivation, far from it. Its a story about 6 over 50s casual (very) riders doing the Hauraki Rail Trail. 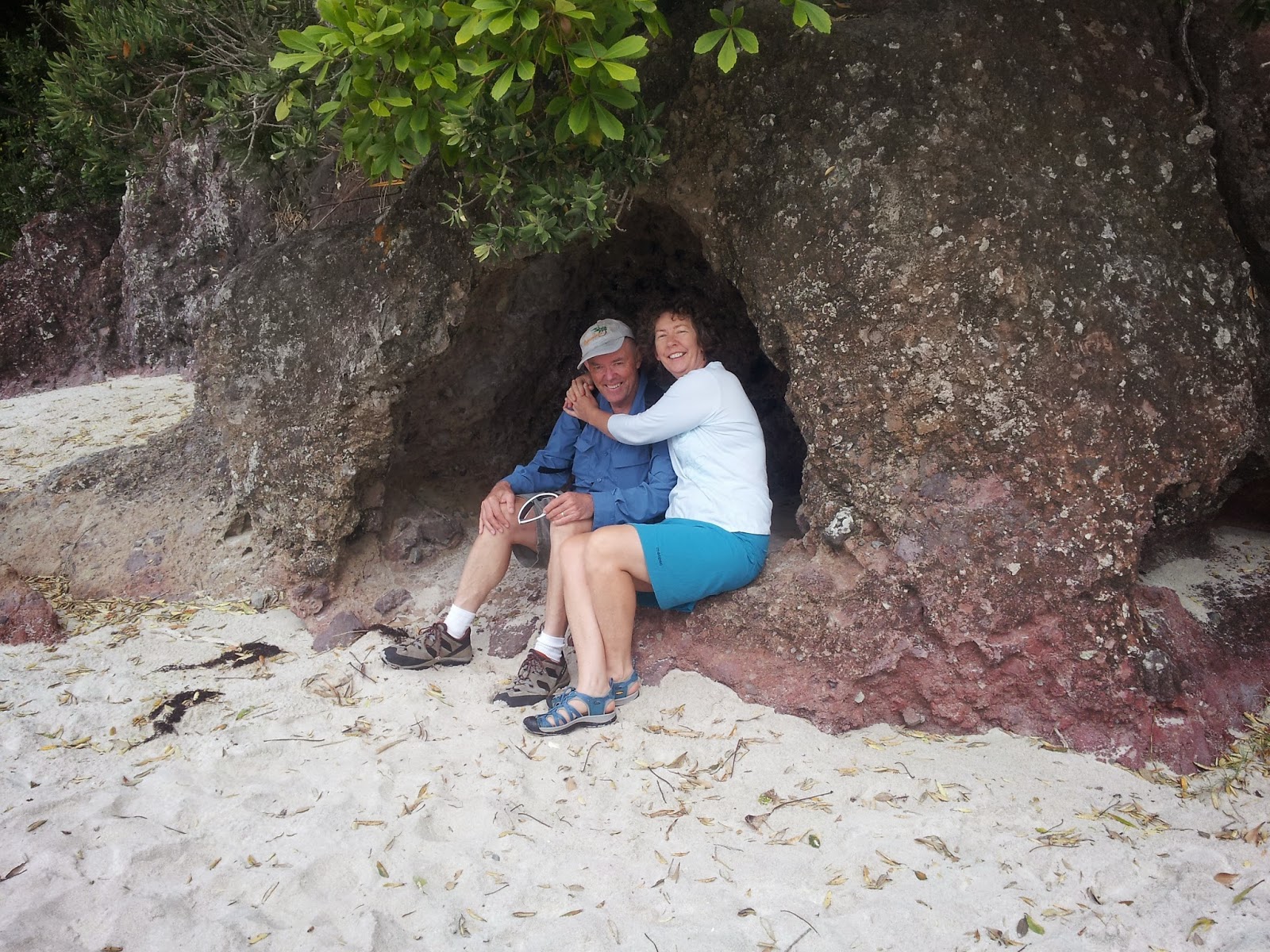 We had a lovely holiday earlier this year with our friends Janet and Colin who now reside in Tasmania. They are great travellers and are always looking for a reason to come back to NZ. Janet is from the Arnst family down south which has a great cycling legacy associated with it. Janet and Colin have recently acquired electric bikes which has enabled them to cover parts of Tassie with less effort than would normally be required. Our plan was to spend some time with them chilling out at Hahei near Whitianga, and get started on the  Hauraki Rail Trail and meet up with Janet’s sister and brother in law part way through.

We had almost a week together resting up at Hahei sampling some fine Wellington Craft Beers which I brought, and Colin obviously didn’t have access to in Hobart. In fact there wasn’t much sign of Craft Beer anywhere we went up there, so be warned! Hahei was lovely and a very nice warm change for us as Wellington was already starting to get colder. The accommodation was well appointed but each day we got a new surprise at the cockroach’s new hiding places. They kept us on her toes. They like the warm. There were critters everywhere actually. Big black crickets in the grass, massive tiger slugs and on different days there were quail or pheasant walking just outside our bach.

In typical Coromandel style, the day we tried to leave for the start of our Hauraki Rail trail experience it bucketed down, trapping us in Tairua. No worries. There was still  plenty of accommodation and the road was cleared early the next morning.

The next day we tootled in to Thames and collected Colin and Janet’s
bikes from the Rail Trail HQ and we were away. We left the car there as I
was intending to ride back to get it after we got to Paeroa, our day
one destination. The trail was fast and well manicured. It skirted the
edge of Thames for a while and then on to Kopu, Matatoki and past
Puriri, where I once lived, (our house was gone) and on through Hikutia
and on to Paeroa. The trail, to me, pretty much resembled a very well maintained
cattle-race with views best described as “rural New Zealand”, not
really anything like you would see on the Otago Rail trail. Lots of
green grass and the hills of the Coromandel just to the left.

The people that “organise” the Rail Trail have done a great job at promoting it, and getting locals to open up their homes as Bed and Breakfasts and making visitors feel welcome. We stayed with a semi-retired couple of a similar age to ourselves. Apparently there just wasn’t a lot of accommodation in Paeroa as it was, so it has been great for stimulating the local economy. Paeroa, apart from the large concrete Lemon and Paeroa bottle is mainly known for its Horse Racing and Motorcycle street racing event.

I rode back to pick up the car while the others relaxed and thought about where we were going to have tea.

The next day in Paeroa we met Janet’s Sister and brother in law, Jennie and Rob  and we hit the trail to Waihi via the Karangahake Gorge. Our accommodation in Waihi was a very recently built home that we had all to ourselves for the night. As per agreement, our gear had been dropped off by the shuttle so all we had to do was ride there.

The next morning Colin and I jumped on our bikes and did a lap of the Martha mine which is pretty damn impressive. It was of particular interest to Colin who when we worked together years earlier, had done some work in the area. The last time I was in Waihi was for the Waihi to Waihi time trial and I had no idea the giant hole in the ground was even there. We did our loop and and hit the gravel back to a point on the Rail trail where we were to meet the others who had taken the “train-option”. Its not sure which is faster, bike or train. Probably the bike I suspect. The train goes from Waihi to Awakino.
We regrouped and continued on the trail until we got to the Karanghake
Gorge again where we did the “Windows walk” through the old Talisman and
Crown mining operations. It was well worth a look and even a typical
Coromandel apocalyptic down-pour didn’t dampen our spirits too much. There is a lot of info on the Karangahake Gorge here.

We grabbed some lunched and headed off to our next destination which was Te Aroha, basically just hang a left when you get back to Paeroa !

It got a little bit wet at times and there was some pretty serious flooding left over from the previous day’s downpour. One last stop for scones and tea on route and we rolled into Te Aroha and found our cute little “Miners cottage” which had underfloor heating in the bathroom. A great way to dry out our wet gear. Janet’s bro-in-law, Rob, and I got shuttled back to Paeroa and we brought the cars back. 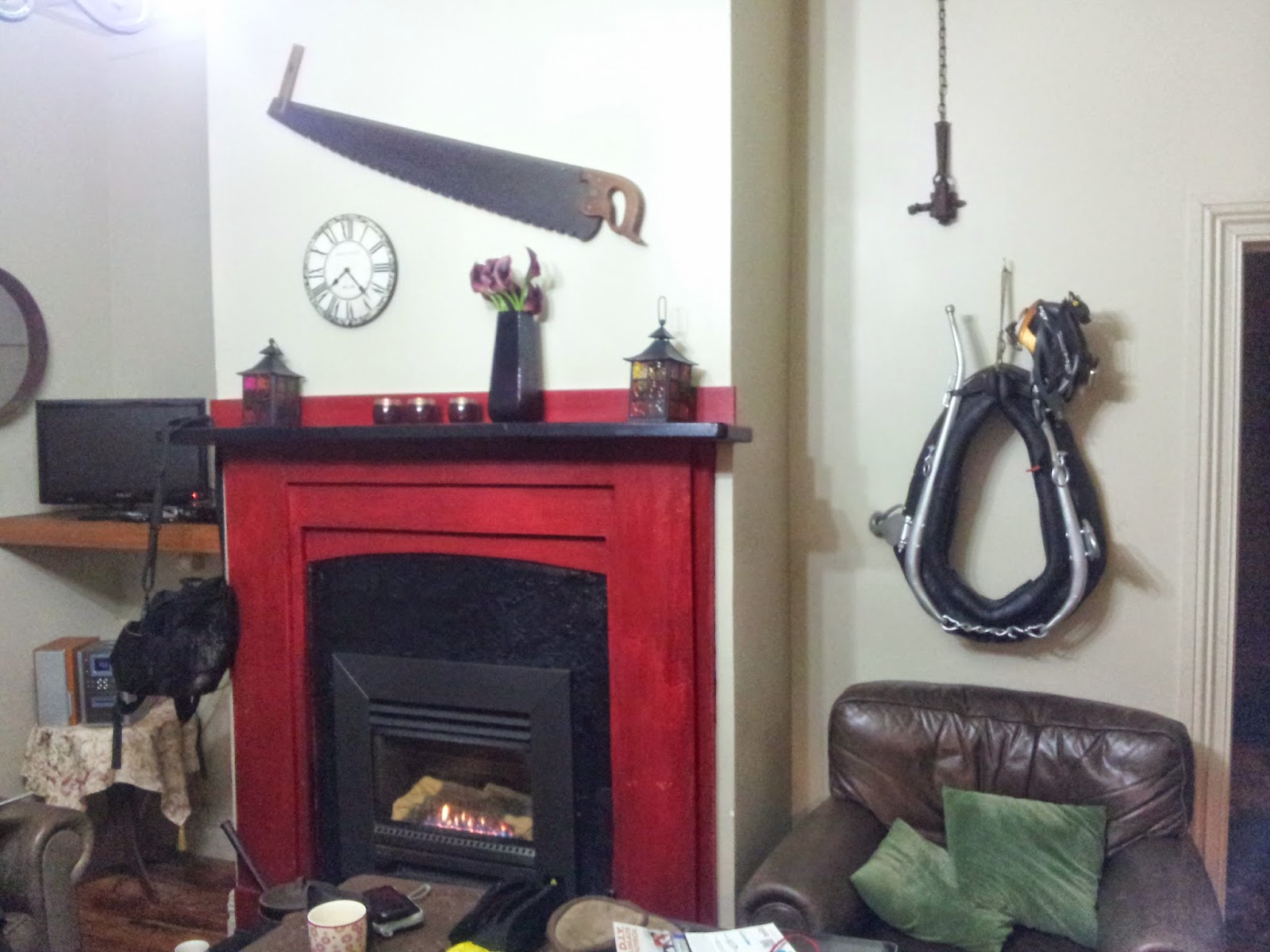 It was a fun trip and and would score highly for those who live towards the sedentary end of the “Couch Potato” scale. The hire bikes used were reliable, if a tad heavy. Not that there were any hills. It’s a much more achievable ride than the Otago Rail trail for the less athletic adventurer. The organisation of the shuttles and accommodation via the Rail Trail people was faultless.

If you were in a hurry (and a bit fit) you could no doubt do the whole thing in one day but it would probably be best to do that kind of thing mid-week. On the weekend when we were on the return leg from Waihi to Paeroa the trail was very popular with lots of young kids out amongst it. There were also alot of middle-aged people out there like ourselves. Janet’s brother in-law was hammering away on the last day trying really hard to catch up to some people out in front of him. When he finally caught them he realised they were 60-70 year old ladies!  We got chatting to them as we waited for a shuttle at the train station and it turned out that I had ridden the first Kiwi Brevet with one of the lady’s sons, Nick. It’s a small world. Lets hope we are still getting out in it like these ladies were, at the same age. 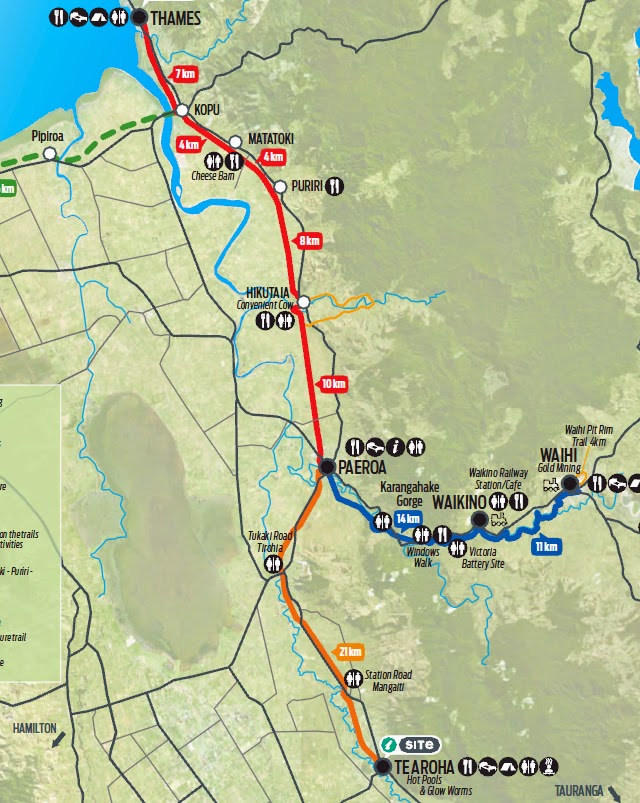