When spray-painting your dog its important to mask out the eyes and ears. After applying a white base coat you can over-spray in the colour of your choice. 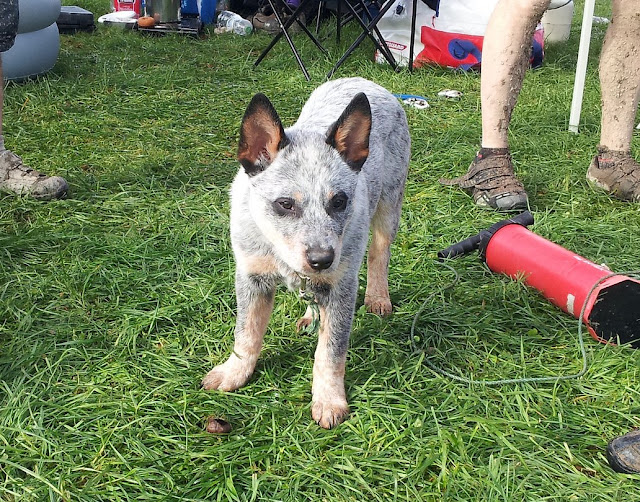 This little doggie (Ducat) was very popular at the Wainui
Worlds 6 hour event the other weekend. He pulled more chicks than a
well-heeled dude with a ‘Fat-bike” !

Four of us were riding
with the Biketec Team, and our Team Leader Simon was doing double
time on the Cycle Science Team. Our team consisted of Dave –  907 Fat bike. Chris – Cannondale Prophet and Simon had a Merida hard tail and a
Transition Transam. I had my Karate Monkey and my Singular Kite, both
running drop bars. There wasn’t room for my fully in the end, and with
the weather looking like it was going to be miserable it was probably a
good idea to keep springy and pivoty things home in the dry.

Simon had been raving about his Transition 29er for quite a
while so I was keen for a blast on it. I tried to encourage everyone to
run the same pedals so we could swap about. One of the coolest things
with teams racing is being able to try a different rig on the same
course and compare it with the previous one.

Dave’s Fat Bike was not idea for the conditons (no snow or
sand to be seen) and I think the lap Simon did on it saw him come in
with the reddest of all his faces on. I wasn’t that keen and had my
hands full with other bikes. Considering Dave’s fitness he did bloody
well to punt it around in the sticky mud.

I did the first lap on my Karate Monkey with the Knard on the
front and it felt like hard work. It does feel hard when you are not
even keeping pace with guys who are supposed to be racing for 6 hours
themselves, but ours was strictly a fun team so there were no big
expectations.

I eagerly grabbed Simons Transistion Transam for my next lap and was
really impressed. Its the closest thing to a motorbike I have ever
ridden that still had pedals on. It had a big-hit fork up front with a
20mm thru-axle and big fat Hans-dampf tires on it. It had monsterous
bars, a tiny stem and it was very forgiving while also being quick
handling. The geometry reminded me a lot of my Karate Monkey, with its
shortish rear stays, but a quick check of the stats showed that it was a
full pound heavier at 6.4 pounds, and the cockpit was a fair bit
longer. This bike is bullet-proof. It was a real blast to ride for sure,
but not ideal for the course we were riding on. Had the Spoon Hill
section been in the mix this bike would have been in its element.

My next lap was on my Singular Kite cross bike which I had
just recently converted to single-speed. I was running a 34-18 gearing
combo and it just flew up the climbs. It was the lightest rig by a long
way at a sniff over 20 pounds. This lap was a real blast but I would
have lost a bit of time on the lower Snail Trail on my 33mm tires.

When you are in a 4 man team you don’t get that many laps, and
my last one was back on the Monkey, this time with the Knard
substituted for something weighing about a kg less. It was my best lap
and I think it was a toss-up for which lap was the most fun. They were
all different in their own way, but I am definitely a drop-bar fan at
WTP. On these kind of courses you can run a pretty simple rig, rigid,
drop-barred or single-speed and be giving away next to nothing.

In the end the rain cleared up about 30 mins before we started
and the course held up beautifully, which apparently is more than you
could say for the event it clashed with in Rotorua. The organisation was
awesome and there was a cool very low-key vibe. It would be a great
course to do a solo 6 hour on.