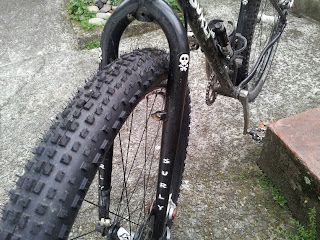 Here are some first impressions of my new Knard 29+ 3 inch tire as fitted to my rigid Surly Karate Monkey. These tires are not supposed to be fitted on anything less than a 35mm wide rim, so the hell fires of damnation will likely rain down on me some time soon. The rim they are built to go with is the Rabbit-hole 50mm rim.

My rim is a Sun Ringle Equaliser. I have no idea how wide it is, but I am not someone who pushes the limits as far as bike handling goes, so hopefully the tire wont fall off. I have also run 2inch tires on Mavic Open Pro road rims with no problems, so take everything I say with a grain of salt. I have seen elsewhere were people have mounted them to Stans Arch rims to give them a spin. There were certainly no issues with setting them up on my rim. 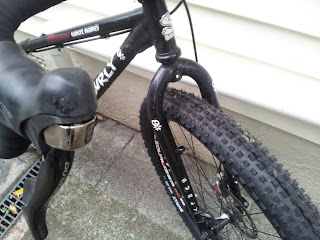 This bike is currently set up for this weekend’s Single Speed nationals so I thought I’d sneak in a few rides to see how it felt. I started with only 11 psi in the front. Going was tough initially up Belmont Road Hill into a head wind with the low pressure but got better as I changed direction into a muddy cow-pocked climb up onto the Old Coach Road. Traction was great, the front didn’t dig in, so the rear didn’t slip under load. I wasn’t expecting that.

I was really looking forward to the slippery rutted descent down the Maranatha Bridle track. I usually hate this track in the wet, but I was surprised to ride it with heaps more confidence than I normally would have on my 26er fully. I was impressed. The tire soaked up all the bumps and didn’t once slide off the camber. If I could have fitted one on the back I would have been flying. Back on the tar-seal decent and the tire was inclined to steer very straight and not want to wander off line.

This morning I did a bit of reading and saw where most people seem to be running them at 19 to 21 psi, so I put in 20 psi and found it to be responding a lot more rapidly with side to side movements, like a normal tire. It felt similar to running a normal 29er tire with about 25 psi in it. Of course you miss out on a fair bit of the cushioning effect.

I haven’t yet ridden up hill with the higher psi but I’m expecting it to roll a bit faster. There is no doubt its a very heavy tire; reported to be 1270 grams for the 27tpi wire bead version. The tube itself is massive and feels like it weighs about 300 grams. I would have weighed the tire but couldn’t find anything big enough to contain it : )

Here is the most information I have found from a person currently using the Knard in its two versions.  The post is by Nurse Ben. 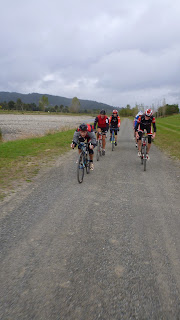 After the heat (and worry) of the lunch time challenge had died down I
was quickly hankering for a semi-organised Gravel Grinder. The invites
went out on Facebook as I already had a route in mind. The tour de grace
was to be the Puketiro Road climb which links the back of Moonshine,
via Bulls run road to Battlehill Forest Farm. I’d done it a few times
while getting in some miles for the Tawhio Brevet and figured it needed a
bit more exposure to the skinny wheeled (cx) brigade. It developed a name; the BCGG (Boganville Casual Gravel Grinder) Spartacus Challenge,  in honour of Fabian Cancellara (nick-named Spartacus) who was doing battle in Paris Roubaix later that night.


I got a good response from some of my old Kiwi Brevet buddies who
are typically always up for a challenge. Two Owens, an Andy, Rico from
Iride, Dave and a special guest appearance by the only sub 3hour
Karapoti rider alive today, or in the past, and most likely the future
(Peter Reynolds). In lieu of Cleetus who was suffering food poisoning,
Calum took over the seismologist slot and we had a quorum.

All riders convened at the Kelson lights in deepest
Boganville and we hit the River Trail of redemption looking for gravel
and hills ! A short stint of tar-seal and a dive under the Moonshine
bridge and we were onto the Riverstone Roubaix which is a nice little
Upper Belgium secret. We emerged from the fun little segment of single
track and exited out on to Riverside Terrace proper and then rolled down
to the bottom of Moonshine and ambled up the steep side, a ride I was
appalled to hear Andy had only ridden once before.

After descending the other side onto Bulls run road we
hung a left onto the Gravel of Puketiro Road, and made our way to the
top of Battle Hill via some awesome wide logging roads. Pretty smooth
and plenty steep. 12% for 16 minutes. All was going sweetly until the
first little piece of decent when the go-fast crew; 4 of them scored 5
punctures on one corner ! DOH! Novices. 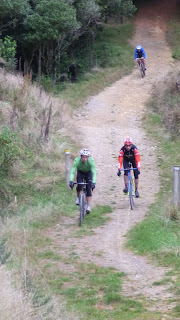 The downhill proper was a blast as we snaked down the
eastern most side of the Battlehill loop amongst the pines; the surface
was good, a bit loose but dry and fast. We snuck out of Battlehill on
the periphery of a horse gymkhana. We hit the tarseal for the Belmont
Road ascent which takes you from Judgeford up into Belmont Regional
Park. Its a nice farm 4WD trail, a much more pleasant route than the
scary Haywards Road.

By the time we were descending
onto Belmont’s Hill Road it was starting to feel like it had been quite a
long day. In truth it was only 4 hours but it was a value packed ride
with only three short downhills in it. I went home to recover while the
more hardy (younger) dudes did the right thing – staying up into the
small hours to  watch Spartacus smash them all in Paris Roubaix.