Mike at the Bike Hutt had been talking about a Gravel Grinder for a while now, and so it came to pass. The
Hinakura 100 was a 160km ride on a secret course in the Wairarapa. As we had all guessed, it would take in the back end of
Admirals Hill, and possibly head out along the Pahaoa River to the coast
and back. A beautiful piece of gravelly road that flanks a normally
emerald green river down below.

We collected our laminated map and course
notes and rolled out of Martinborough Square at more or less 8am. It was
a beautiful crisp and sunny day with the potential to get very hot. The
action started almost immediately when the first turn was missed, and a
rider went down when his front wheel was clipped. He banged his head a
beauty at quite a low speed. Unfortunately it was game over for him 5
mins into the ride.

We carried on, sniffing out the elusive gravel that was going to
justify the usage of our knobbly tires and shiny Cyclo-cross bikes.
Dave Sharpe was already up the road by now, getting some run-up for the
first hill on the fixed gear single-speed bike he likes to call the
“Death-machine”.

I tried to take a photo and then struggled to get my camera back in
its bag as we started the first of our gravelly ascents, which just
happened to coincide with the first real move from the riders at the
front.

I found myself in a little group with Ken Feist, Dave, Nick Kennedy
and the NZ women’s Cyclo-cross champ Kim Hurst. By the time we crested the hill
there was a bit of a gap to the more sensible riders and as we
concentrated on pulling back Dave we must have increased it a bit more.

The problem with Dave’s death-machine was its inability to descend at
speed, due to it not having a coasting hub, so as Dave continued to
smash us up all the Hills we would eventually pick him up going down the
other side. Ken must have decided to be more sociable and drop back to
the next group behind.

The next big Hill was the one approaching Hinakura, while not
gravel, it was still a beauty. Somewhere up there we lost Dr Nick and
despite seeing no sign of Dave up ahead, we soon pulled him in again
down the other side. Kim and I, making the most of the tail-wind and
down hill, pushed on, at a very sociable conversation pace down to the
coast for the turnaround.

This part was fun, because it was out and back, and we could see who was
closest to us. Dave, Nick and then the group with Trevor Barryn and Ken. A spot of rain in the hills that week had the
normally pretty river flowing a muddy brown. The upside was that the gravel
roads were not putting up any dust. More of a concern to me though was
the head wind, the return elevation, and how long Kim would put up with
me sucking her wheel !

A short section of tar seal lead us up to the turn at the Hinakura
Hall and it was into the farmland proper. These were farm roads. The
domain of tractors, Big Reds and Hiluxes. This was the high-light for
me. It could have been anywhere in rural New Zealand, but here we were grovelling away, trying to ward off the cramp. With no sign of Kim up
ahead I stopped at the top to take a photo. And and as I was about to
leave, Dave and the death-machine turned up. This was a contentious spot,
as Map-my-ride had omitted the road name in the course maps it had generated. I had
been up here once before, and so had Dave. Gut feeling was that left was
right. A bit of downhill followed then the big one. Admirals hill.

Admirals hill is the Queen stage of the Tour of
Wellington each year. It’s the big one, but the mostly untraveled “back side” of
it is gravel. This was our route. It was getting hot. Not Wairarapa hot,
but hot enough that riding through the short patches of shade made you
want slow down and linger a while.

I was really suffering by now, hoping for the gravel to abate. Looking for signs
of civilization. Seeing a school bus sign always does it for me.
Children live nearby, therefore it cant be more than 50kms to the
nearest country school. Unbeknown to me Dave was a long way up the road
getting dive-bombed by magpies. I wasn’t, either my slow progress wasn’t
deemed to be threatening enough to them, or the big white eyes I stuck on the
back of my helmet were doing their job. More aerodynamic than the
zip-tied porcupine look.

Good news bad news. The gravel stopped but the tar seal got steeper.
This was particularly testing for riders like Dave, Mike Anderson and
Ben Knight on their single speed Cross bikes. I think there were single speeders in the Metric hundred as well. They also took in this part of the course. I stuck my head down, spat
the “milk bottle” lollies out of my mouth as there was obviously not
enough saliva left in my glands to swallow them.

I crested the hill and enjoyed the long descent and as it flattened out who should appear
beside me but Kim. She’d taken the right instead of the left at the top
gate and reckoned she added about 10kms to her journey! We rode on and a few minutes
later picked up Dave suffering from his usual gear shortage on the long
flat section back to Martinborough. I think The hill on Millars road
was the last time we were all together, and as Kim legged it off down
the other side I only gave a half hearted chase as I knew my goose was
crispy on the outside.

Dave caught me up again and must have a photographic memory or
something as he seemed to know exactly where to go without looking at
the notes. I was in reptilian mode and all ability for cognitive thought had long gone. I would like to say that we rolled into the
Martinborough Square to the adulation of our peers, but we didn’t. They
were still out there. Anyone that respected anyone else silly enough to
do a 100 mile Gravel Grinder was out there participating.

Tom was out
there, having not been on a bike in about 7 months. Thomas was there
having left home at 2am in the morning to ride over the hill from
Wellington. Owen borrowed a bike because his brand new one broke a week after he built it up. I’d be surprised if anyone of them regretted it. 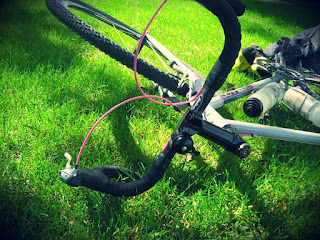 For me it was a chance to test my new bike, and it came through nicely. A
steel frame on a long ride like this was perfect. Not one scary moment
and no sore bits anywhere. I’m not sure how much of the smooth ride was
due to my carbon rimmed wheels but it may have
helped. Although I had several periods of bad cramping I was still able
to stand up and move my position about on the bike. Riding more than
twice a week would probably be the best way to address the cramp issue in future I
would think.

On the day around 30 hardy soles entered the inaugural Hinakura 100’s. About 20 in the Imperial, and 10 in the Metric. Thanks to Mike Anderson and his
team from the Bike Hutt for organising it and giving us another reason
to go out and play in the gravel. I am sure we are all looking forward to the next one.