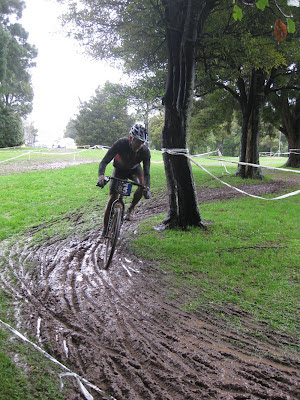 I was keen to see how I was going to go in my first CX of the year. I have been doing a fair bit of gnarly hill running, but have been not quite averaging 1 ride a week for the last couple of months.

I remember last year at the end of the CX season feeling like I needed like a rest, right when I should have been stepping up my training ! I was determined not to do to that again this year, even though I wanted to support my Kiwi Brevet buddies Owen and Andy’s new series.

Despite the turgid weather it was quite warm at California Park, with the friendly atmosphere that always accompanies Mike’s events. A couple of people had really lifted their game from where they were when I last raced them (even taking my form into account).

Last year I could beat, or keep pace with Kim Hammer-Hurst, but now she is at the new level that saw her crowned NZ elite women’s Cyclo Cross champ a few weekends back. She looks awesome in her new kit! Andy King was at another level as well. Jonny Waghorn was going really good on his singlespeed but I think the SSers found it a bit hard as the course got increasingly cut up for our race.

I had a wicked duel with Ken Feist and Mike Thomson for a while, eating each others dirt. Me on my Karate Monkey, Mike on his Masi SSer, and Ken on his Di2 Felt !  I had already used my last lap effort on my first lap, so there was no responding when Ken finally woke up and put the hammer down on the last couple of laps. I did manage to hold off a hard charging Mike though, and narrowly avoid getting lapped by 2nd placed Andy. I felt like I had a bit of an advantage with my big-big 34-36 granny gear combo that let me ride all the little climbs while most of the pure CXers and SSers had to dismount.

Alex Revell was in a league of his own, and he needs to be, given that he is heading off to Belgium for a CX season in a couple of weeks. What an adventure! I wonder what Belgian mud is like?

Oh yeah, I took Kens advice, which KFC gave him, on air pressures. It helped heaps.

.. and some pix from the better half : http://www.melhamerhurst.blogspot.co.nz/2012/07/bike-hutt-cyclox-round-1.html

Rumour is that there will be a weigh-off next time, Marco’s MTB vs Kens CX bike!


In September 2010 I wrote a post about some of my favourite things;
at the time one of these was the new Sunbeam Electric Kettle that
replaced the dodgy Russell Hobbs Kettle that we persevered with for over
a year.

Less than 2 years later the $189 Sunbeam Kettle has
crapped itself as well. What price do you have to pay for quality today?

Is there such a thing as quality anymore? We paid top dollar for our European Miele
dishwasher, which 4 years down the track is blowing water out its
drying vent.

The 500$ Asus netbook I brought from Playtech lasted for 1 month outside
of its warranty. Not that Asus is a high end product but you’d still expect more.

The last decent watch I bought
lasted a year before the strap broke off. Now I just buy Warehouse
watches. These days I think my plan will just be to buy crap stuff. Your
expectations are low and you can probably get 3 to 4 “crap” products
for the price of one “good” one.

All of my buddies high-end Litespeed road bikes have failed. None of my
cheap crappers have.

Unless my Surly Karate Monkey gets run over by a
bulldozer I know its still going to be a going concern in 10 years time.