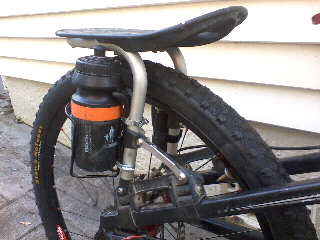 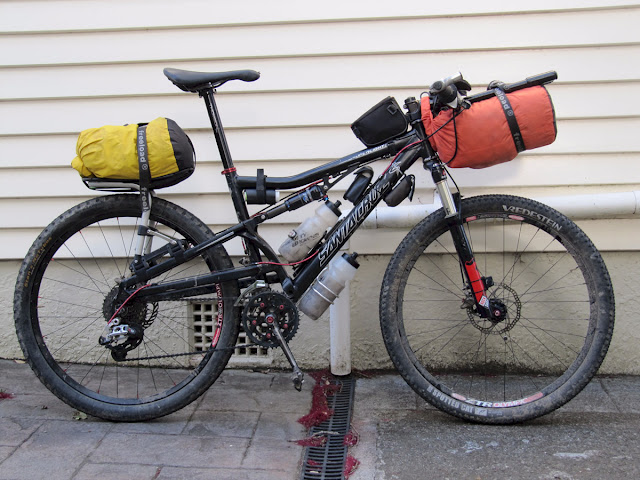 Dont forget to email in your profiles if you are doing the Brevet.
http://kiwibrevet.blogspot.com/2012/01/briefing-start-list-and-rider-survey.html

I am a bit of a Freeload rack fan-boy. (Previous post). I used one on the inaugural Kiwi Brevet and have found nothing bad to say about them since then. One
of the big advantages of the Freeload is that it will fit on almost
anything, one rack fits all, rigid or suspended, front or rear.

One day I noticed that there was actually a heap of clearance between
the wheel and the rack on my 26 inch bike – the same rack also fits a
29er. Tim, one of the designers said, yes it was made one size for all. I
thought that maybe if I “chopped” my rack, I could get even more
clearance between my kit and the back of my seat under full suspension
compression. Tim reckoned it might work and sent me a couple of frames
to hack up.  See the results below. It worked brilliantly for my
application, but mileage may vary given frame/swing-arm angles etc.

I have also had a new tour deck, but have not yet had the chance to
use it. I lent it to my work mate Andrew (one of 4 of us at work doing the Kiwi Brevet)
and he installed it yesterday with some very serious looking panniers
on it ! It feels rock solid. I reckon one pannier would do, they are massive. 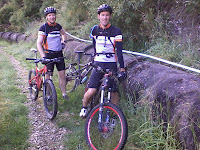 I always have a great time when I head south to holiday with both my wife’s and my families who live in Nelson and Blenheim respectively. I was keen to ride over from Blenheim to Nelson via the Mangatapu track but had to double back when seeing the (erroneous) road closed signs. Apparently they had been there for over a year. That meant back tracking to Pelorus and back onto the road. An extra 26kms of gravel, but all good training: )

Once we got to Nelson I was lucky enough to get invited out by my “Cuz” Paul McNabb for some early starts while the whanau were still asleep. One day before (Paul’s) work we managed to sneak in a lap of the Coppermine circuit with event organiser James Hufflet. They were both keen to check out if the flooding the week before had washed away any of the new work done on the track. It was all mint, and nothing like the track I had ridden two years earlier. The next day Paul got my old Hutt bogan buddies Susie Wood and Gazza organised and we met up at 6.30 to ride a newish track called Involution up the Marsden Valley near Stoke.

The Xterra atheletes Suse and Gazz were smacking it good up the roadie climb, but Cuz was about to get his revenge, at least momentarily. At the top we came across Eloise Fry and her dog, that made 4 Santa Cruz’s on the ride. The Santa Cruz virus has run rampant in Nelson with Stylianou Mansions dealing it out like crack in the Baltimore slums. The previous day’s ride was also a Santa Cruz affair, with James as always sporting a very bling looking carbon Nomad.

Cuz was eager to show off the merits of his new acquired seat dropper and spanked it down the “Involution” track proper. A few minutes later I caught up to him as he was rearranging his undercarriage having just smacked into a newly fallen tree – a byproduct of the floods. There was some more damage at the lower parts of the track but nothing too fatal.

A couple of days later I loaded up the bike and headed off early for our final holiday destination, Penzance Bay in the Marlborough sounds, via the Mangatapu Track. Sifter had been through the previous day, so I knew it would be open, despite all the stupid signs at both ends.

I was reminded how short the hill was on the Maitai side, and there were only a couple of very small unrideable bits. It was lovely travelling in the shade of the bush canopy in the early morning. The descent down the other side was a bit rougher, but nothing too bad. By the time I got to Pelorus it was heating up, and was getting pretty steamy as I navigated the 4km climb over the Opouri saddle. This was a real beauty, probably the gnarliest road climb I can think of, for that distance.

The scenery from the top of that hill was incredible. Penzance Bay seemed like a very well kept secret. We met up with all of my family and indulged in lots of fresh seafood for the next 3 days. One day Ash and myself did a very gnarly run up the hill for a couple of hours and took in even more sights. A day or two later I did a leisurely ride along Archers Track for 9kms to Elaine Bay. It follows the coastline the whole way and is a very achievable ride or walk. I came across a set of deck chairs in the middle of nowhere. There were no bogans to steal them this far away from the civilization ! 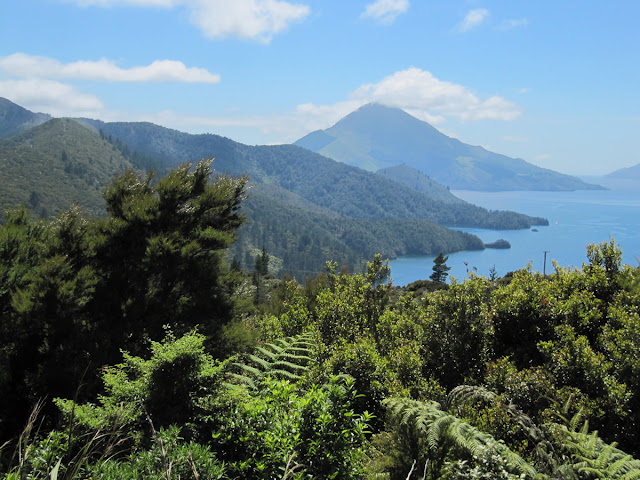