I had my first real MTB race on the Karate Monkey on sunday at the Wainuiomata Trail Park, round 1 of the PNP series. It was also my first offical race as a Master 3 (50 year old). Not that I am 50 yet, but I will be this calendar year. Given that I was M3, I knew there would be limited technical challenge to the course (knowing the course designer’s preferences quite well) so running a rigid frame wouldn’t be too much of a hindrance.

The hooter sounded and I wound up the new 46 sprocket (thanks Marco) and shot past a fair few of the combined M3, M1 and elite field before we turned off 10 seconds later onto the first climb. Straight away I was hammering up behind my old protege Jordan Blake and before long Marco floated up behind us on his 17 pound C-dale. I could see Marco was angling to take the left hand side of the water-tower at the top of the first climb, but my gut feeling was that the right side was quickest. Jord had the local knowledge so I went with him. Good call, we didn’t see Marco again for quite a while, until I heard him call out from behind that “The Painting Man was coming through”. Despite his digital weight-loss techniques Ian Paintin was still a bit behind on the climb, but was about to make his move. He busted through on the descent and we levelled out again on the next small climb.

The first of the granny climbs went well but I lost traction just before the top. On the second climb, Ian had the good line on the left, and I had the gnarly one on the right, but he spun out and speared off over to my side forcing me off,  apologising profusely like the gentleman racer he is.

We remounted and somewhere before the main ridge track Marco made his move and got ahead of me before the left turn into the newly built Towai single track. Ian was having none of it and retook the lead, having been caught behind Marco’s extra large elbows before. I on the other hand was not so clever and spent what seemed like an eternity stuck behind the Godfather until he agreed to pull over. I have the guys in the workshop working on a high-voltage Capacitor Discharge device that should enable me to give Marco a good zap on the ring-piece if he shows a lack of fair play again!

The new Towai track was great. Narrow and winding, and a bit rooty, but I cant wait to get out on it again. The wagon wheels on the Karate Monkey seemed to eat it up quite well, but I suspect a bit of front end suspension would have been a help. I got out onto the main trail in second place wondering how far up ahead the Painting Man was.

The bee-line descent went well, (took the girls route) up Jungles and down Snails and over the Wetlands and on to an unmarked fork in the track. Bugger. What to do. The majority of the wear and tear to the track seemed to be to the right so I went that way. Doh! 20 seconds later I almost had a head-on with someone coming the other way so I back tracked back and took the left hand fork. I heard a coasting free-wheel up ahead and wondered if it was another super-crusty who had passed me while I was going the wrong way. Sure enough I spied Gary Moller up ahead. Catching him was hard, as I kept hitting back markers. They were always courteous and pulled over where they could. Gary is at the upper end of the super-crustys age bracket and has just gotten faster over the last 3 or so years. I snuck past him near the top of the climb somewhere but didn’t put much time on him down Snails on the next lap.

Somewhere along here things get hazy. I would swear on my death bed that I did 3 laps of the course, as outlined in the Course Algebra description, but obviously I did 4, and I apologise for convincing Gary that we had an extra lap to go, as it cost both of us a place on the podium. A small amount of post-race research found that there was a strong correlation between our numeracy skills and our final positions, with school cert maths results having a big influence on the final outcome with Ian Paintin scoring 98, Marco 86, and me a dismal 50. It all makes perfect sense now.

All things considered it was a good day, a fun track and some good riding. Things are looking a bit dire up our way at the moment. The Waitangirua Forest Park is closed for lambing and Danzig is likely to get levelled so that the timber can be turned into car-boxes in Japan. On the up side Marco and his buddies are building a new link track from the Coach track across to Hill Road  (I think).

The above foto was from Andys shots. More photos and relevant links here. 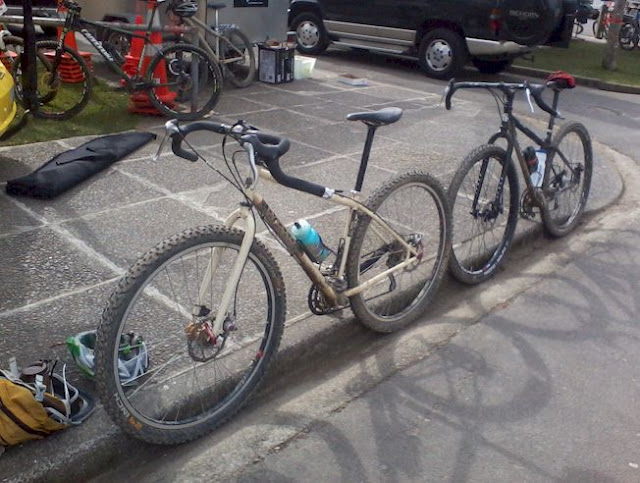 Who would have thought, my first ever experience of riding on snow would happen in my own back yard!
After the dumps we got at our house I figured there might be heaps more up the hill, so headed off up to the top of Belmont Trig before work. It was amazing, no wind and about 6 to 8inches deep where there was a northerly aspect. Hard work riding up it, but a blast coming down! 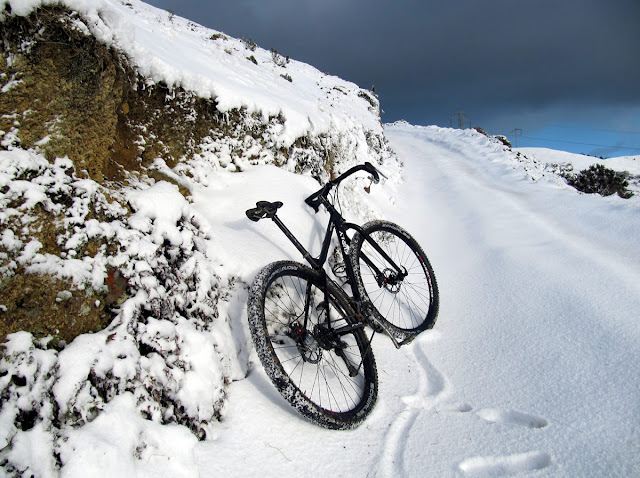 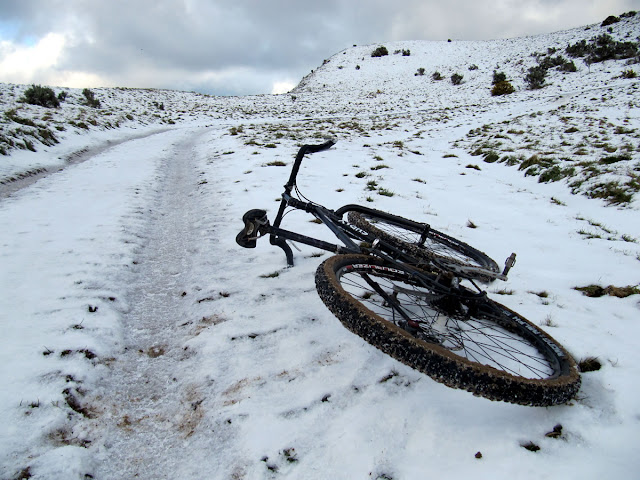 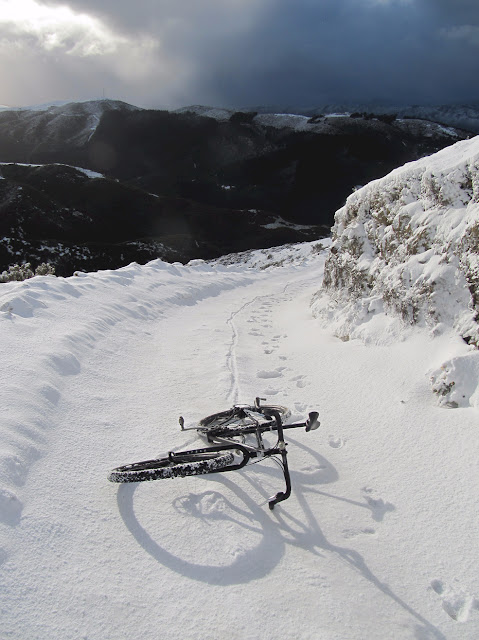 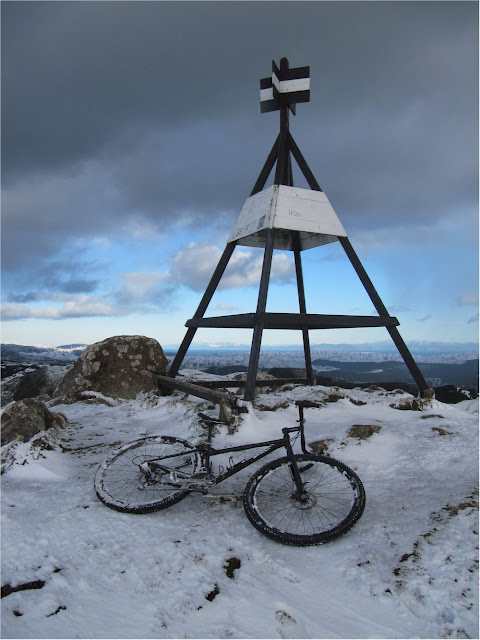 Here are a couple of nice shots from Craig Madsen from The Bike Hutt’s latest Cyclo Cross in Upper Hutt.
He must have had some old black and white film in the back of the fridge ; )

Craig’s Pugsly was a popular ride at the race. Incredible to think that Surly are about to launch one with even fatter tires called the “Moonlander“. 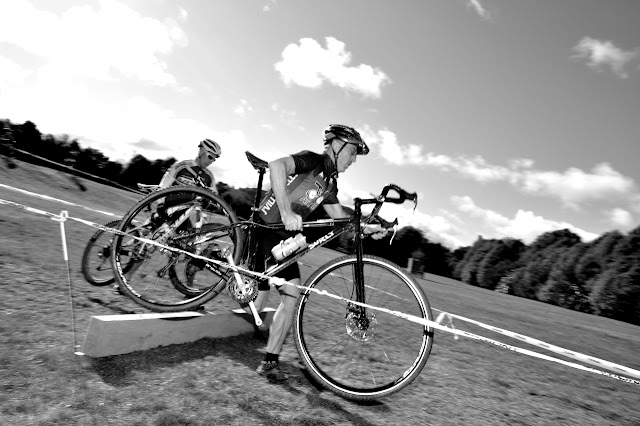 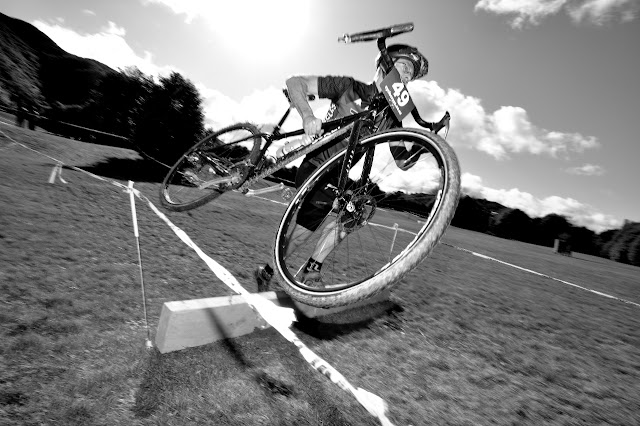 About 1.3 seconds after this I slipped and fell flat onto my knees in front of the next barrier ! The guys that were bunny-hopping these were taking heaps of time out of those of us that werent. There are some great photos of guys on CX bikes getting big air in the Bike Hutt facebook, in particular Ben Knight.

It was a full-on course with lots of tight corners and quite a few barriers to deal with. The hardest one for me so far. What was really cool was seeing the little kids doing their race. This is the perfect environment for the kids to race in as its not easy to find flat places for kids in the Wellington area.

I am a bit surprised to be going as well as I am at these events as my bike training at the moment is pretty much 1 ride a week ( 2.3 hrs a week average over the last 3 months) as I get ready for the Butterfly Creek Midnight Madness Night Run which is on this weekend in the Hills above Eastbourne.

Its a 15 km two-man teams event, (480 metres of climbing) but unfortunatley myself and Cleetus both got broken-arses last week, him with his back going out, and me with my first time experience of  ITB (illiotibial band syndrome). I probably got it by trying to run downhill too fast just trying to keep Cleetus in sight. Hopefully with a serious taper we can enjoy ourselves for a few hours on saturday night.

More photos here from the Bike Hutt’s Facebook page. Ken Feist had a good race and on his Blog asks the question we are all thinking. Where are the Wellington Roadies? As I was waiting for Cleetus at the bottom of the Hill (on the ride out) both the Welly bunch-ride and the Meoow GP ride came through. I guess we missed our chance to infiltrate and spread the good word….

The Karate Monkey is getting close to being a final build with the addition of some MTB wheels – brand new, complete with new Racing Ralphs for $285 off tardme!

Some Avid BB7s disc brakes (mtb version) complete the package. All of this has bumped the weight up by about 3 pounds to about 27.5 pounds over the v-braked road-wheeled iteration I was using at the CX’s. The CX tires will be back on for this weekend hopefully. 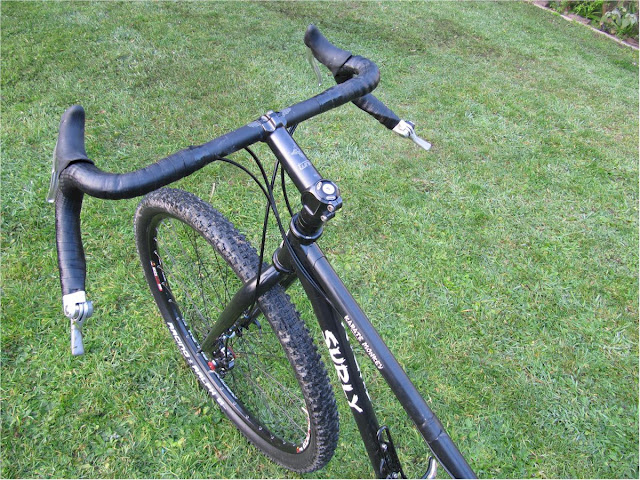 It got a good hammering at Wainui Trail Park last weekend. The drop bars were great, but the rear brake was almost unusable they were skidding so much. I know that the Racing Ralphs roll incredibley well on the road, so a bit of the skidding could be caused by them, but I think I basically had the Avid BB7’s set up too well. I backed off the inside pad a few turns when I got home. Hopefully it will make them less vicious as the outside pad will have to drag the disc over to the inside which should knock back the efficiency a bit.

I am really liking the Woodchipper drop-bars. I cut 2 inches off each side last week so now I can at least get them into the shed without snagging bottles of turps and paint brushes all over the show.

The position of your hands when riding these off-road is such that its like hanging onto a big set of bar-ends. You can get massive amounts of power through them, which is handy, because with bar-end shifters, I am not going to be changing gears as often as I would if I had an STI road shifter on the front right. 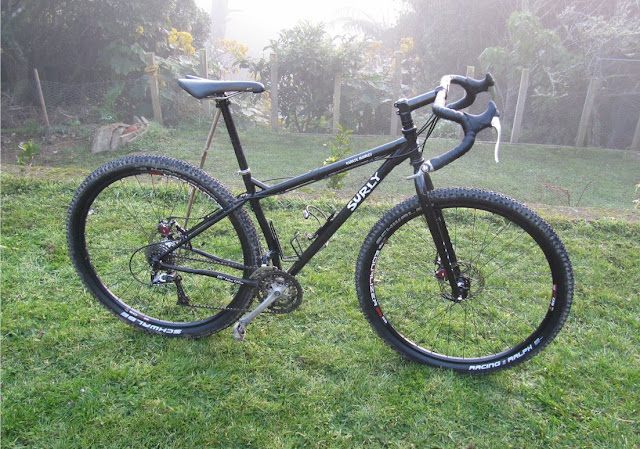 There are several reasons for this choice of shifters. You need a different set of BB7s for road pull levers (mine are special ones that pull the normal MTB amount) and I am using them in friction mode as I would be surprised if STI would work with my circuitous cable routing : )

Beer – it’s a kiwi favourate – but according to NIWA global warming might just be about to taint your pint.

Another beer related item. DB has managed to gain ownership of the trademark ‘Radler’ . Imagine if Ford were the only people allowed to call there cars “CARS”. The rest of would be driving “Motorised buggies”.

I like the suggestion of Radler brewers putting an ‘@’ in the name to give the finger to DB.