Last saturday myself and celebrity seismologist Mr Cleetus, hit the Wainui Trail Park yet again. We were both on our rigi-didgy 29ers and as I followed him up the Wainui Hill I pointed out that his rear dropout looked less than perfectly vertically aligned. He acknowledged my concerns and pedalled on. We shot up Labyrinth to check out the new trail that is being built up near the top – The Towai Traverse? It is really coming along and is quite different to the other trails at WTP. A bit more natural rather than being so smoothly bermed. Towards the end of the trail it started to get pretty muddy. Initially my Beaver/Karma combo was sweet, but before long it had turned into a big fat mess just like Cleetuses dry weather Geax Akkas. 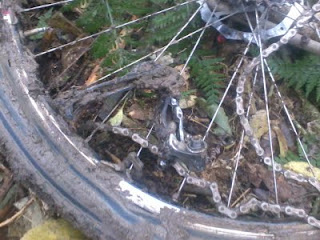 Before long there was a foul exclamation and Cleetus stopped to view his now extremely dislocated rear derailleur which was jammed between the spokes in a most unnatural position. His non-replaceable steel drop-out was also looking very munted. We were in a quandry. What would Bear Grylls do? It was way too cold to pee on our tee shirts and make a bandana so I elected to break the chain and make a singlespeed to hopefully get us home.

After 10 minutes we eventually found the power-link in the mud covered chain and we removed the rear derailleur. Cleetus related to me a belief that it might be possible to realign his drop-out to a usable level by leveraging it between two branches in a tree. 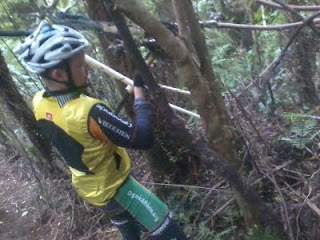 It sounded far-fetched to me, but anything was worth a go. Low and behold there just happened to be several trees near-by, one of which was a good fit. 10 minutes later the whole thing was reassembled and we scrambled up the short-cut to the firebreak to continue our ride.

We decided to keep it safe and leave the gear changing to a minimum but had to ride down the Snail Trail at least a couple of times. Its a very fun trail on a rigid bike and I was really enjoying the control on the “wide-as” Woodchipper bars. I always assumed that they were a disadvantage to Cleetus, but I am well and truly convinced now that they are not.

We shot up Jungle Gym and Directors and down the Wainui Hill to finish off an eventful day.